I subscribe to a lot of blogs.  One is Thingiverse.  I really, REALLY would love to have a 3D printer -- so much I could do with THAT.

Anyway, yesterday there was a post entitled "Remix Everything" and I realized that this is EXACTLY what I do in my games.  You probably do too.  We OSRians have been remixing for some time now.

Here are a few pics to illustrate how I "Remix" all the time. 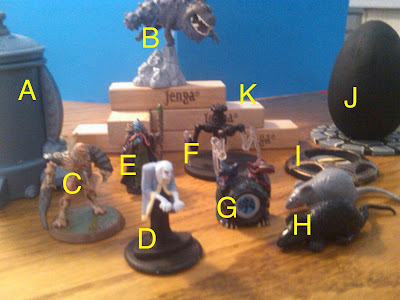 A - plastic toy from Dexter's Laboratory -- think it came in a Happy Meal.  Perfect for Mad Scientists/Mage's lab
B - Gronckles dragon from How to Train your Dragon
C - Heroscape Mini (Marro warrior of some kind)  See Hydrospawn
D - V.V. Argost from "Secret Saturdays" has been glued to plastic disk, is now Uuthak the Obscure in my CotMA game
E - Bathalian mini from Reaper (this is the "normal" thing you'd use)  :)
F - Star Wars mech/droid mini.  I've used this as a deadly construct along the lines of Matt Finch's Amphorons of Yothri
G - Strange Japanese die from dice game.  Repurposed as dragon headed altar.
H - Rubbery mice from Walmart at Halloween.  They are about $1 per dozen.
I - Compass now a magic well
J - Wooden egg from Michaels, now the Regen-O-Pod
K - Jenga blocks -- good for EVERYTHING
Below is a picture of just SOME of the books that I frequently pull off my shelves for use during my games.  There are many, many, many more, but I ran out of floor. 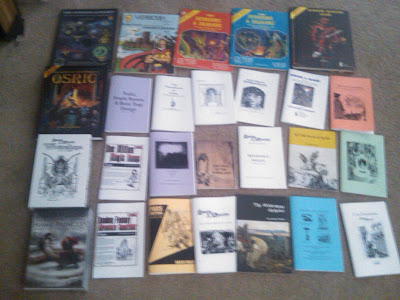 Books (top to bottom, left to right -- in no particular order)

If you aren't pulling stuff from about thirty-seven different books, you probably aren't trying hard enough.  :)

Blair over at Planet Algol has talked about this. This idea might also work for science fiction gaming as well. I've got to print out those greater demons of yours. Awesome post!

You might wanna check out http://www.shapeways.com/ Jim. It's the next best thing to owning a 3d printer.

Not yet... I've been waiting until I have something worth printing out. Had some plans but I've been tied up doing the whole papercraft thing.