Last night, my grandson Lance came over to hang out for awhile.  His mom had softball and he hadn't been over lately, so it was a good time.

Anyway, Lance is a Legomaniac.  Seriously.  He loves the Legos.

We played air hockey for a few games but eventually I couldn't resist busting out the new Lego Heroica set I bought.  He was instantly captivated.

Being the incorrigible DM that I am, I couldn't help but tinker with the rules.  I explained to him that we were going to explore the complete castle (3 games; different layouts).  During the first two games, whatever magic or treasure we found, we would carry that over to the next game.  If our characters died in the first two games, they could regenerate and we could regenerate all our hit points between session.  In the final session, if we died -- we were out.  We'd need to team up to defeat the goblin king.

In my back pocket I had a rule that if no one character made progress during a turn, the goblin king would get one random reinforcement from the goblin jar.  Never had to use that.  Lance didn't fool around.

The first game was occupied mostly by Lance getting a handle on what his characters could do.  He took the knight and the wizard.  I took the barbarian and the druid.  Basically, you roll the Lego die to move and if you end up fighting you roll the die again to fight.  The one symbol that is common to both rolls is the shield.  If you roll a shield during movement, you can use your ranged power.  If you roll a shield during combat you can use your melee skill.  Here's a picture of a page from the rules.  You can see what the character skills are at the bottom: 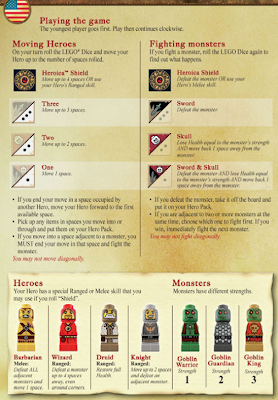 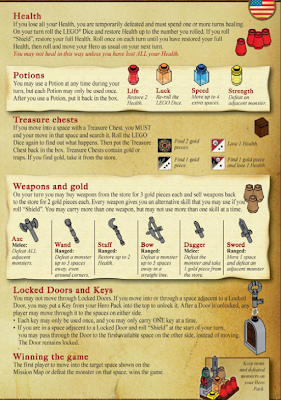 During Game 3, I really thought Lance would be afraid that his characters would die.  He wasn't.  At one point, his knight with only 2 HPs left charged a green and grey goblin.  The green does 1 if you lose in battle; the grey does 2.  He took on the green first and won.  Then he took on the grey.  That could have been the end.  Nope.  He rolled a shield and took him out.  High-fives across the table.

At the end of the battle, we had to go 1:1 with the goblin king.  My barbarian had a potion of strength (instant kill) and I told Lance to just wait.  Nope.  He ran right in with his knight and rolled a sword.  Dead goblin king.

Great game, great fun.  This just might be the "gateway drug" that the OSR needs.  A few rules tweaks and you've really got something.

Proposed Rules Tweaks for Heroica to OSR conversion (not playtested yet):

Now I have to buy that! Damn.

My boys would go ape shit for that game. Thanks for the tip!

I love Legos! How is it that I've never heard of this game? This would be perfect for my nephew - he's kind of intrigued by role-playing games but somewhat intimidated. But he loves the Legos. This seems like a good entry game for him.

I am really considering this but the price is kinda steep for the amount of stuff it seems you get. I already have the same sized characters pieces in the Lego Hogwarts game and we have the Hogwats castle set. I'm considering making a "map" of tiles through it and using these Heroic rules to fight spiders, serpents and trolls or something along those lines. More of a Harry Potter theme.

I'm really intrigued about using these rules and just making a random map out of odd pieces we already own. Just need the darn die. Maybe we'll pick up the cheaper Draida set and go from there.