Did a little erasing and now it's a perfectly good sign for your old school tavern.  The party needs to meet somewhere after all... 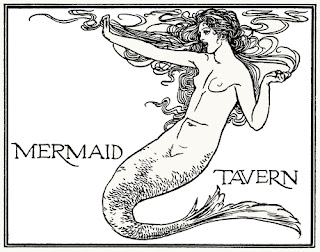 I am not trying to start a flame war or any kind of contest between systems.  I'm just posting to show how much of a grognard I am (I guess).

This chart which obviously took a lot of time to make and is quite excellent -- just makes me tired.

The chart is for the Barbarian class ONLY.  There are many, many other classes in Pathfinder.  Just the thought of trying to understand all of these feats/powers/thingies is overwhelming to me and my old brain.

Hell, these days spell descriptions in anything but Microlite20 are too much for me.  This is my kind of spellbook.  Heck, this is my preferred way to run a wizard.

I just want to make stuff up on the spot and try to maintain consistency.  I find that my players will remind me of decisions I made and I try to maintain a non-adversarial approach with them.  That works pretty well.

Anyway, thanks for reading.

Email ThisBlogThis!Share to TwitterShare to FacebookShare to Pinterest
Labels: osr

In my Queston Campaign, all those years ago, I replaced regular Paladins with a different type of Paladin called a "Totemic Paladin."

These Paladins had powers based upon their totem animal, rather than the standard list of Paladin powers.

Here is a list of Totemic Paladins and their powers:

You could certainly make up your own variants following a similar pattern.  Enjoy!

Email ThisBlogThis!Share to TwitterShare to FacebookShare to Pinterest
Labels: swordsnwizardry 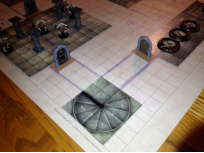 Now that the party is over and I've had a chance to put everything away (not really) I've decided to recap the adventure for your reading pleasure.  :)

I started out explaining the game to the players.  They are all 6th to 7th graders and are all friends from school.  The oldest player confided in me straight away that he didn't know if he was going to like this.

:)  I thanked him for giving it a try and I dove into the rules.

I handed everyone a character sheet and I told them that this wasn't necessarily their character, but they needed to follow along as I explained things.  They nodded and were very attentive.

I began by explaining that they should name their character and that all self respecting characters have a portrait.  :)  I pointed at the five miniatures I had selected and identified each one by class; fighter, wizard, dwarf, elf, hobbit.

I told them that sometimes bad things happen in the game and that to avoid this "bad thing" they might need to make a saving throw.  I showed this area on their sheet and explained that they would use the d20 (black die) to roll.  I also described each die type in turn.

NOTE: my "training" dice are all color coded.  Makes it easier on the kids.  :)


I read their "Armor" value and pointed out the chart at the bottom of the page.  I told them that some characters had bonuses that would modify their "to hit" roll.  I went through a couple examples.

I talke about their "Hit Points" and how they would do damage to monsters.  We looked at the We used a battlemat, so I restricted the characters to a certain number of squares of movement.  They could attack/move or move/attack.  No penalty to moving and missile fire or spells.

Then I talked about equipment.  Told them to be creative.

I explained the back of the sheet and how at the start of any combat they would get the chance to draw a stone out of the pouch.  They could use the stone during that battle, or if they saved it -- they could draw first out of the pouch -- thus increasing their chance for a better stone.  This worked well.  The wizard really took advantage of this and was rewarded a couple times with good spells -- Burning hands especially.

Then I told them that they had recruited a group of farmers to go along with them.  They weren't brave adventurers, but they'd help them fight to rescue Ehlissa.

Finally, I shared the tips on the back of the sheet --

• Work together as a team • Think about what you might do if you were there – what would you look at?

• Try to visualize the place you are in • Ask questions.

• Ask for more information. • Think about how you might use your equipment • Don’t be afraid to run away if a monster is too powerful, you might be able to find a tool or item that can help • Remember, its only a game.

If your character doesn’t make it, you can always make up another one some other time. • Have fun!

Then I read the start of the adventure.  We dove right in!

Here's an example set of character sheets -- these are setup differently than during the adventure, but I let the kids keep their characters.