Now that CotMA is wrapped up, I'm playing rather than DMing.  :)

Here's the mini I painted for my PC -- 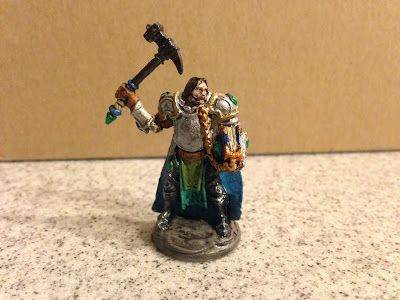 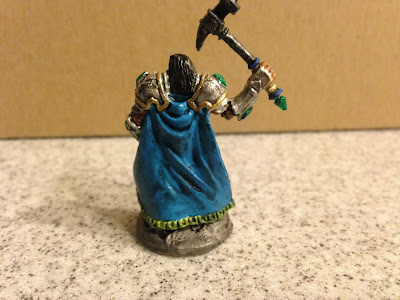 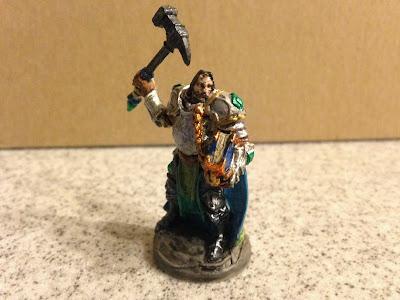 A few weeks ago, I posted about making my own Gelatinous Cube minis.  I made them about 2.25 inches square.

Yesterday, my wife finished off a pepper grinder we bought at Costco. 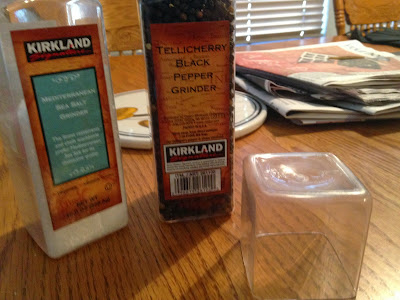 So, I cut the bottom off and slathered it with hot glue.  Here's the final result. 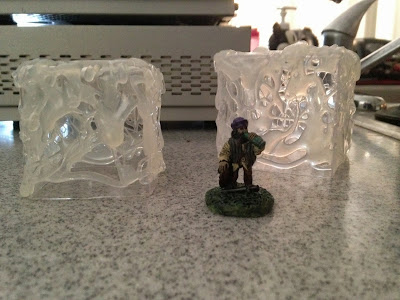 It's the one on the left.  It's smaller, but it's still a very good size. 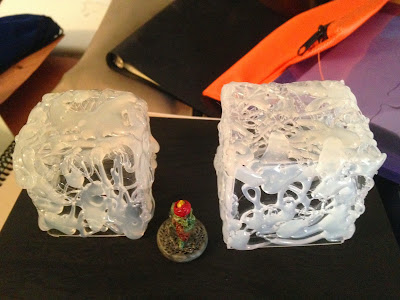 Epic Conclusion of a Campaign - The Pics

Back at the end of August, I wrote about the epic end of my Castle of the Mad Archmage (CotMA) Campaign.

I made a 3D cavern for the epic final battle.  My players took some pictures of the cavern and I'm posting them here.  I hope you enjoy them. 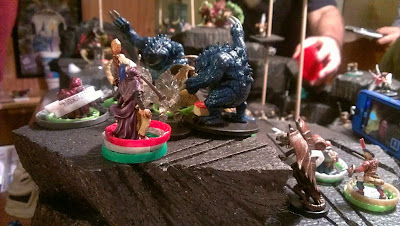 In the pic above, Kalen (Hasted, Minor Globe and Stoneskin) is in battle with some hezrou demons and a vampire.  To his left, Morgrim (Stoneskin, Prayer, Prot Evil, Haste) is also battling.  Down below, Grunbar, Henri (both Hasted and Stoneskinned) are fighting alongside the polymorphed hobbit sneak, Hildigrim (Gold Dragon.) 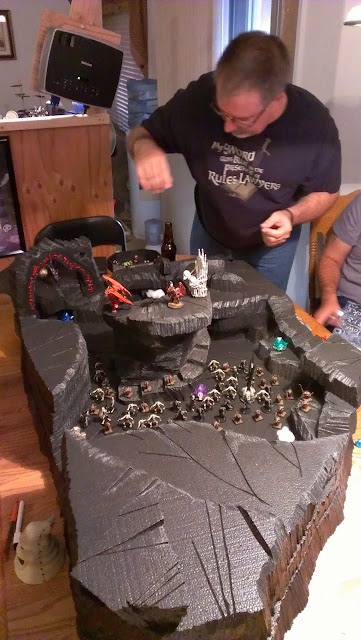 In the above pic, I'm setting up the battle.  The hordes in the lowest part are all ghouls.  Orcus and his balor General sit near his Bone Throne.  Anti-magic crystals and smoking Dark Cauldrons can be seen in the pic.  The trapped form of Gloomstorm the Shadow Dragon. 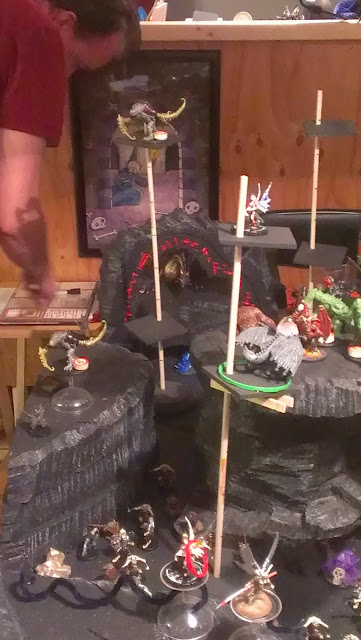 Undead harpies, vrock, angels and shadow monster dragons do battle in the air above the ghouls.  The black curly thing is a line of "Grasping Shadows" cast by Biata to keep the ghouls at bay. 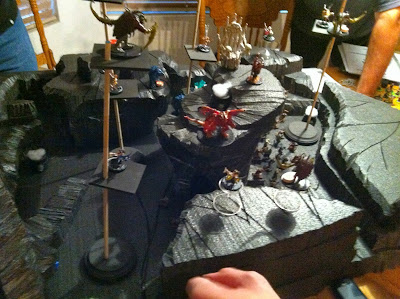 Lots of flyers at various levels.  I use Hook Horrors as vrock. 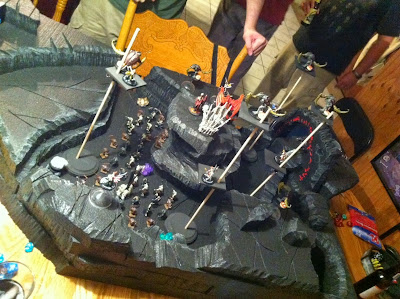 It was epic!  Thanks gang for the great pics!

DM Scotty over at the DM's Craft posted a video about using dice boxes as flight stands.  Good idea.

I thought I'd post a couple pictures about what I typically do to indicate flying monsters.

I use these little plastic champagne glasses I bought at Hobby Lobby.  You get 24 for $6 and Hobby Lobby ALWAYS has a 40% off coupon on one item, so that makes them $0.15 each! 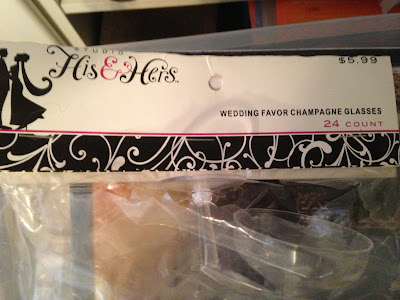 You can use them cup up or base up, whichever you like better.  If you use them cup up, you can easily put some small dice inside the cup to help indicate altitude.

I am one of the many responsible for this horrendous atrocity.

Email ThisBlogThis!Share to TwitterShare to FacebookShare to Pinterest
Labels: adventures

Found this at Big Lots for $3.  He'll make a nasty monster or big bad someday.

He's from some game called Redakai??  Don't know what that is.  I'm thinking it's like Pokemon.
I'll need to do some touchups and I might change the color scheme, but he's pretty cool...

[40k] Halo Terrain on the Cheap

Stopped by the Big Lots yesterday and I discovered a toy on clearance for $12. 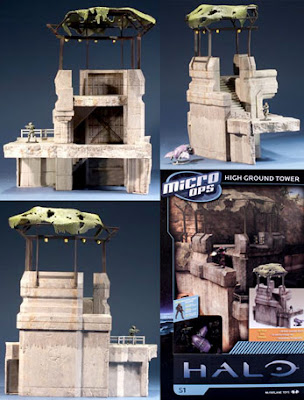 Here's a link where you can buy them online from Target for $12.48.

I took some pictures of the Master Chief that comes with it, a Space Marine and a Terminator for comparison.  It's a little bit small, but it is nicely painted and it does look pretty cool. 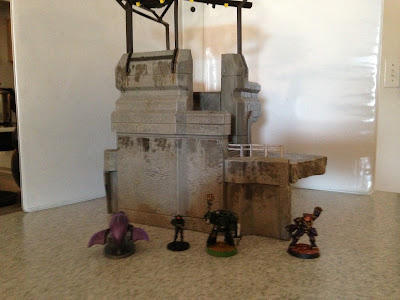 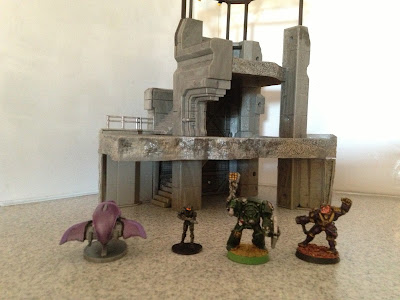 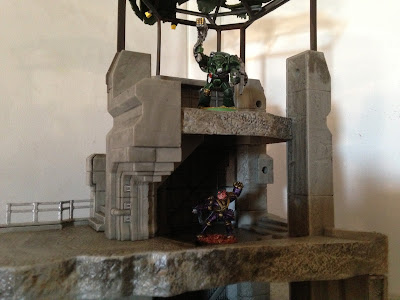 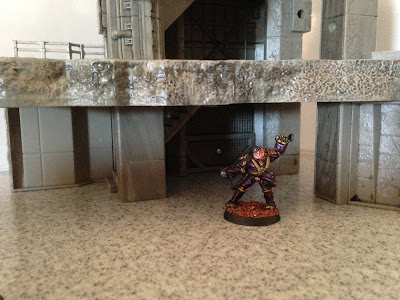 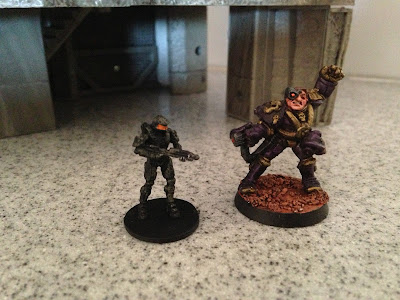 I was cleaning out my room today when I happened upon the cap to a bottle of antacid.  I used it once before as a pedestal for a statue during a CotMA session.

Today, I looked at it and I thought, "hey, I can make a crystal thingy out of that!"

I grabbed a flickering tealight (about 4 for $1) and I drilled a hole in the cap.  I hot glued the thing together.  Then I stippled some latex putty on it to give it a little texture.  Here's a pic. 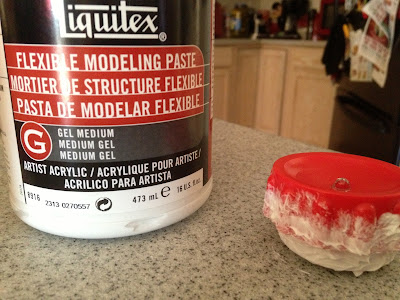 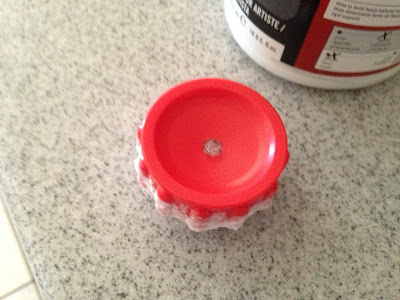 I put a little tape on the LED and I spraypainted the whole thing black.

Then I took some clear crystals (you can get them in the floral section at Michaels) and I hot glued them together into a little pile.  I used a metallic red paint and gave them a thin wash of color.  Then I hot glued them to the top of the "cauldron."  I did a drybrush of light green (eucalyptus) on the rough/paste stippling.  It looks a bit like vines or other mossy growth.
Here it is with the light turned on.  The color of the crystals changes somewhat.  They flicker and glow.
Enjoy!!

Sculpey is a "bake to harden" clay that I use all the time to make stuff for my games.  I've been using it for years and years.  You can frequently get a big box of the stuff for pretty cheap and it never really dries out and it lasts and lasts.

I was at the dollar store and I saw these "ice cube trays." 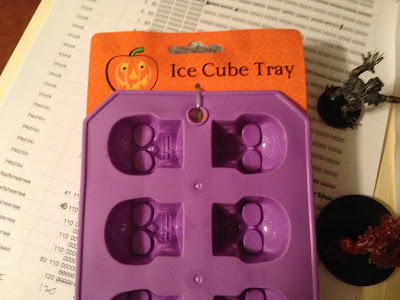 It occurred to me that you could press Sculpey into these and make cool skull castings.  Here's one I made -- 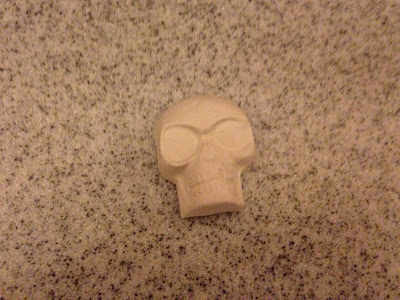 Here's one with a sense of scale -- 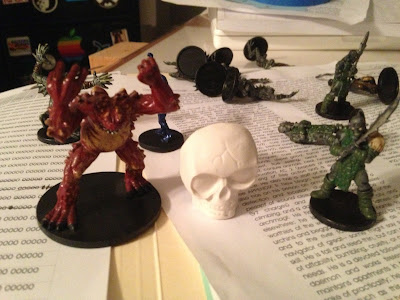 I think they would paint up pretty nice and they would make nice additions to a 3D dungeon environment, perhaps on an evil altar or as a trap or trick...

Roll A Character All At Once

Awhile back, I proposed a Boggle character rolling method.  Here's another one.

I made a "funnel" out of cardboard and I put it into a locking "tupperware" box.  You can shake the dice and wiggle them and eventually they will fall into 7 rows of 4d6.  Pick the top 3d6 in each row and arrange to taste.

This is not very "old school," but it is the way that my new DM wants to roll up characters.  (PS: It's one of my favorite methods too, truth be told.) 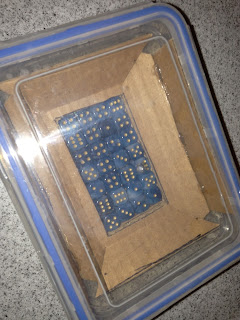 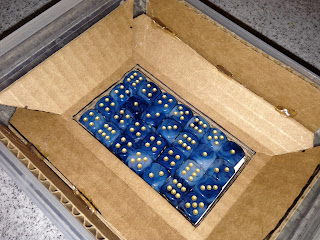 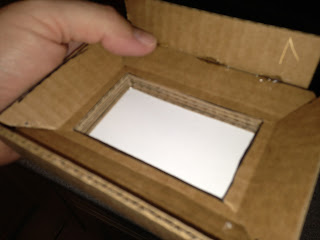 It's a little fiddly and you do kind of have to wiggle the dice while you are looking at them.  I suppose if I made the "hole" a bit larger, the dice might fall into the frame a bit easier and you would be able to roll by "feel." 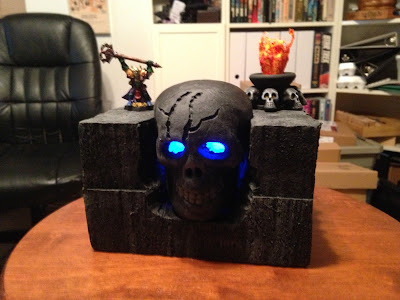 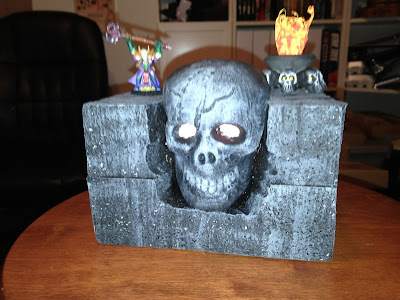