In Praise of the Emergent Narrative 2

I've written about the emergent narrative before.  I like it.  I think there's something exciting about a story developing from chance and player choice.  Much more fun than spending all my time writing a story/script for the players to follow.  YMMV.

Anyway, I was reflecting on this yesterday, as I gathered with a few friends to play Warhammer 40k.

One of the elegant things about wargames is the development of an emergent narrative.

Each of us built an army.  2000 points worth, using the miniatures we own.  I have Space Marines, so does BP.  MP has Tau.  NC has Orks.  We put together two tables.  We arranged terrain -- one table was an urban cityscape.  The other was more rural with alien forests and a couple hills.

We were randomly assigned to each table.  BP would play MP in the forested hills.  I was slated to play NC in the ruined city.

We placed our armies and then the battle was on.


Great stuff!  This is what makes these battles exciting.  The little stories and observations that come from the conflict and the random rolls that happen.  :) 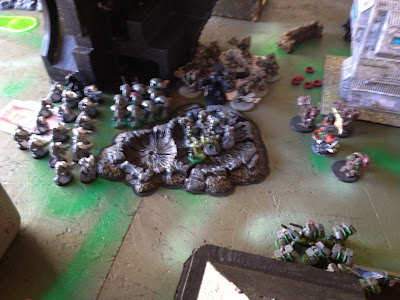 The orks surround a group of marine scouts (in the crater) as terminators teleport in nearby and an assault squad comes in from below.  The ork warboss prepares to join the fray (near the grey building) 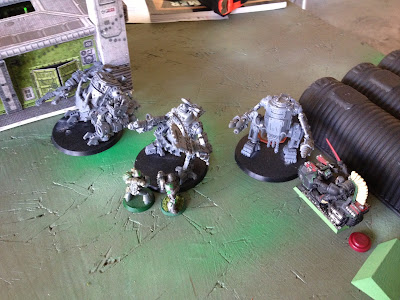 The marine chapter master (on the bike) with his relic blade attacks a group of killa-cans.  Two marines join in.  Only the one on the right was standing (out of a group of five) at the end of the battle.

Email ThisBlogThis!Share to TwitterShare to FacebookShare to Pinterest
Labels: warhammer40k

Being an inveterate tinkerer, I've devised a new version of the sheet.

Here's a shot with the changes -

Section A, I've added some calculations and text that appends to spells in the B Section.  This stuff dynamically changes by level, according to my own personal tastes.  YMMV.

You can see in Section C that I've got some seed numbers that I use to drive Section A.

I wasn't happy with Zak's S (Sleep) and X (X-Ray) so I replaced these with some variable powers based on level.  You can see those at D.

Here's a 5th level version of this wizard, you can see how the powers change...

Some time ago, Zak created a list of magical powers that your NPC magic users/evil baddies could use based upon the characters in their name.

Today, I knocked out a spreadsheet that does the work of listing those powers for you.  It's crude, but it does the job.

Section A contains all the entries from Zak's table.  You can edit these however you wish.  The letters at the beginning have no bearing on the lookup -- I was just too lazy to remove them.  The column to the left, a to z, is the lookup column -- Don't change that one.

Section B is where you type the name of the wizard.  Right below it, you can see a crude set of fields that break the name down into its component letters.  It then does a VLOOKUP against the letter and puts the power in the column.

Section C contains the Level of the wizard (in this case 10) and a calculation for D below.  I divide the level by 3 in this case.  If you want fewer tick boxes you can divide by a higher number; if more, divide by a lower number.  Whatever number or calculation appears in the box below the level is the max number of boxes to appear in D below.

Section D contains little "tick boxes" randomly determined between 1 and the calculation in C.  In this case from 1 to 4.  When the evil wizard uses a power, mark it off.

So, just type in the wizard's name -- print out the sheet and put it in your DM binder.

Let me know what you think.