When A Session is Boring

I ran an episode of my CotMA game last night.  Six of my seven (or eight) players were present.

They decided to "go deep" -- they have goals on the seventh level -- and they decided to bring the whole crew.  We had 14 PCs and NPCs combined.

You see, back in the beginning, when the characters were exceptionally fragile and instant death was a real possibility, I let everyone play two characters.  Some of them died, but some of the players still have two characters.

In short, when the whole party is together, it is a huge, noisy, Continual Light toting, juggernaut of monster death.

Well, here's the rub.  When they have a big party, combat with monsters on the upper levels is too easy.  It's literally a roll of the dice and the monsters are dead.  I think one or two of the PCs can generate 10+ damage practically by default.

Once again, I'm not complaining about the instant death of my precious monsters -- let them die.

It's not appropriate, in my mind, to throw powerful creatures at them on level 2 just because they can handle them.  THOSE KINDS OF MONSTERS AREN'T ON LEVEL 2.


At any rate, the PCs took care of the combat challenges with relative ease.

I did throw in some strangeness, a teleporter, some Mad Archmage magic and a talkative NPC ogre (poor Karn, we hardly knew ye!) to spice things up, but that only goes so far when combat is such a cakewalk.

I guess the bottom line to me is, the dungeon needs to have some kind of rules and if you come in alone or if you come in with an army of 14, those rules apply.

I don't want to scale encounters other than by the level you are on.  You're on level 3?  OK, here's what it can throw at you.  Level 5?  Here's a tougher set of challenges.  Level 10?  You'd better be ready.

Am I wrong?  I feel like the adventure dragged a bit for the players last night, but then again, they were on the third level most of the night.  Most of the PCs are 6th or better.  Hell, one of the NPCs is 5th and the donkey/mule is even 4th level...

Shouldn't an adventure for higher level PCs be a bit boring on the upper levels or is there a DM trick that I've missed?

Back in May, Talysman over at 9and30kingdoms wrote up a series of posts about alternate design features for walls, ceilings and floors.  Check them out if you haven't seen them.

In each of those posts (as you know, cuz you've seen them) he made six little square pictures to represent his ideas.

I must be honest, six little square pictures SCREAMS to be made into a d6 and I have these wooden cubes, 3/4" on an edge, so what was stopping me?

Well, procrastination, I guess.  I printed out copies of each little pic back in May, but they've been sitting in a folder since then.  I made each set a different color --


I just got around to making the dice yesterday. 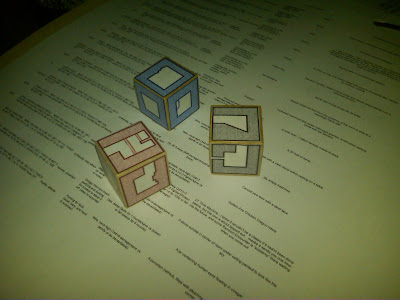 I figure I'll leave them in among my DM stuff and from time to time, as dungeon dressing, I'll randomly grab 1 or 2 of them and I'll mix things up.

Thank you to Talysman for the great posts and the inspiration!

Continuing in the tradition of my local campaign, here are this year's Krampus Coupons!

Attention MY PLAYERS!  I'll print you a copy for Thursday!! 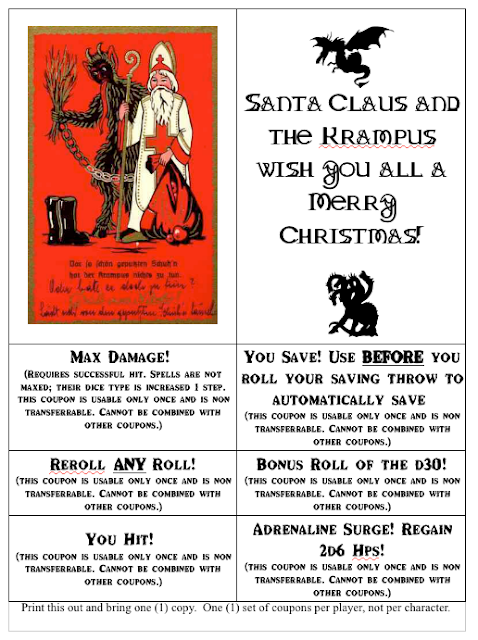 My Christmas Gift to You -- NPC Cards

It's no secret that I like using cards in my games.  I've blogged about godeckyourself.com before. 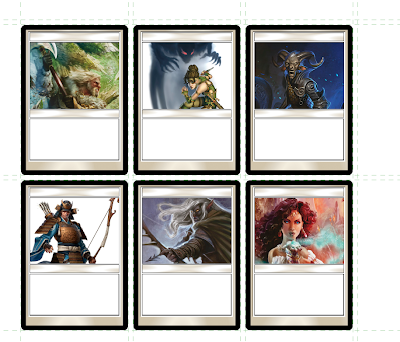 Here's a set of NPC cards you can use in your game.  All the fields are blank; you can write on them using a pen/pencil after you have printed them out.

I've been collecting images off the blogs/sites/posts I read.  If the image was interesting, I dropped it into a folder and cropped it to the correct size for cards.

The following two files are the results of this effort for the year.  100 NPC cards in two files.

As always, if I've used your art and you would like me to remove it, please let me know.  Please know that I'm not intending to violate copyright and my use is only as a fan and gamer.  I mean no offense.

From a gaming perspective, I'm drawn back to the room of pools in B1.  As a DM, I shouldn't underplay the density of a magical liquid... 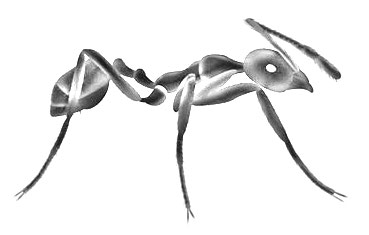 The Dice Have Arrived!

Here they are!  My DungeonMorph Dice! 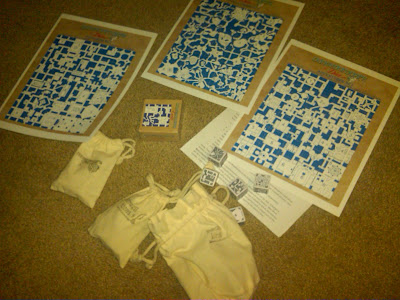 I went a little crazy and I got --

With these dice and --
Thank you Joe for an excellent product (and project!)

The Rules of Magic