Like many of you, I've been playing D&D since 1980 (in other words A LONG TIME).  The term "Vancian Magic" is thrown around a lot and it wasn't until I read "Tales from the Dying Earth" that I knew what it meant. 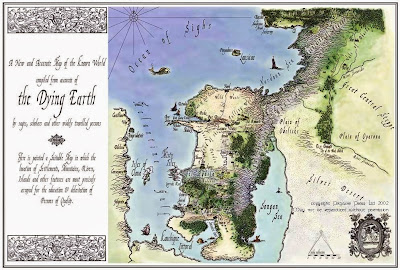 In my younger years, I was a big reader of Moorcock and Leiber.  I read "The Hobbit" but I struggled with LOTR.  I read Robert Asprin, Larry Niven and Ray Bradbury.

I didn't read Vance until much, much later.

I believe that I read somewhere that the word "libram" is a Vancian invention.  He does have a way with words and phrases.  His spell names are fantastic!

Ioun stones are his.  Prismatic Spray is his.  What else in our favorite game has it's origin in his stories?

If you haven't read "The Dragon Masters" you really should. 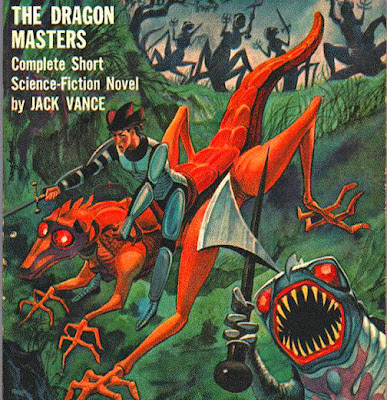 One tidbit that I learned only recently was that "Ellery Queen" was, in fact, Jack Vance.

My Dad loved Ellery Queen.  I love Jack Vance.  I guess that's one more thing that I had in common with my old man.  :) 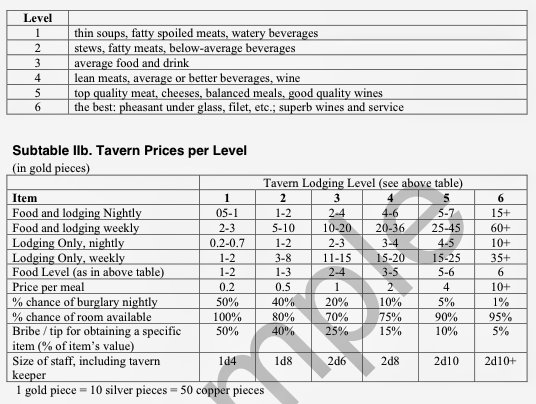 So, what kind of tavern is it?  Generate a name here.

Roll 2d6, one for the Lodging and one for the Food Quality.   You can then cross-reference the costs on IIb.

Enjoy!  You can get the Sampler here. 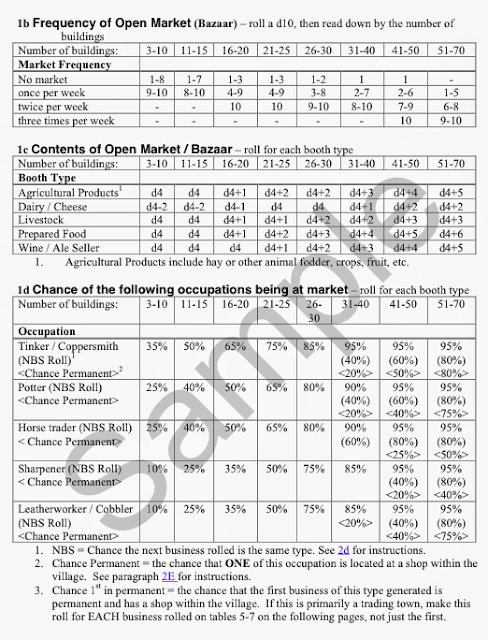 I'd begin by rolling d% and I'd read across the "Number of Buildings" row.
You can modify/tweak the occupations in Table 1d by assigning some lower chances for more specialized types of occupations.

You can get the sampler here.

Years ago, Midkemia Press sold an awesome product called "Cities."  You can still get it as a PDF if you are so inclined.

They also have a sampler.  I think there are some good tables in there and I'm planning to do a few posts about them. 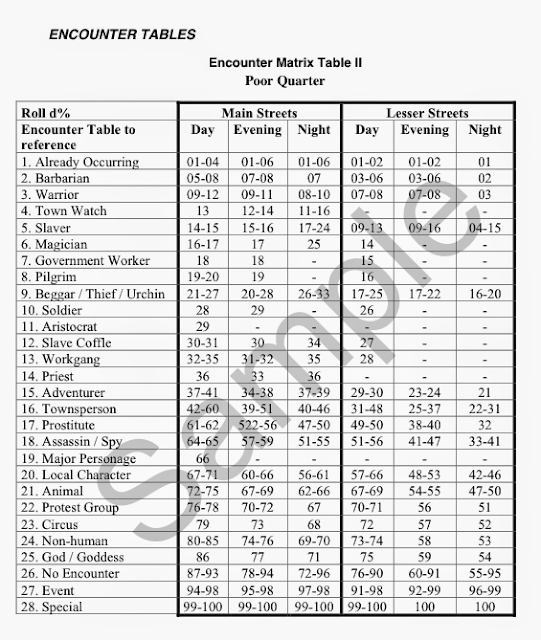 In my campaign, 9 times out of 10, the PCs are probably in the crappy part of town anyway.  Keep this chart handy and roll % based on the time of day.  Most of these categories are self explanatory.  It wouldn't take much work to generate a quick NPC and assign them to one of these categories.  You could easily use my GM Cards to make that happen.  Also my 3 word NPCs.

If you roll Category 1 (Already Occurring) the Sampler has this table as well. 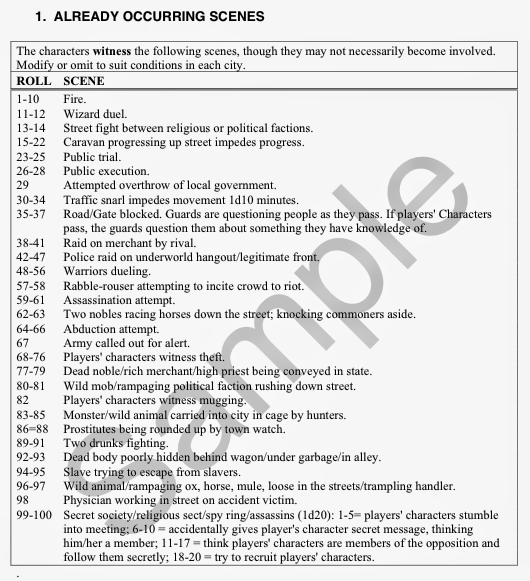 There is some really good stuff here.  Print this page out too.  Maybe on the back of the first one...

I was digging through some stuff on my computer and I found a link to an old PBWorks site that I was using over 5 YEARS AGO to document my thoughts and ideas about gaming.

It was still active (Wow!) so I logged in and found this article.  I present it as a "blast from the past".  Unedited by my current thoughts and sensibilities.  Let's see how it holds up...

One, its the right thing to do. When your friends come over to your house, they want to have fun. They don't want to take part in something that isn't enjoyable. If they wanted to do that, they'd go to work or mow the lawn. A game that doesn't follow these tenets just isn't fun.

Two, I dislike rules heavy games (AD&D 3.5 I'm looking at you!) and so I run my games fast and loose. Right or wrong, I like to think of my RPG sessions as a type of freeform jazz -- we start off in a direction and then we roll with it. I build a lot of randomness and freedom into the game. Anyway, when you play off the cuff, there's a lot of GM fiat. This makes some players nervous because they don't always know what is going to happen next. They don't know exactly how their powers work (Champions! You heard me!) If you try to run your games with these tenets, the players will trust that you'll give them a fair shake. It's a partnership where we are all invested in having fun and telling a compelling story.

I'm not perfect -- no one is -- but I try to run my RPGs according to the following tenets. I think that more times than not, I do a good job and I pull it off. It has taken me years to refine my GMing skills. I offer the following to anyone who is thinking about running a tabletop RPG game.

Try to give all characters equal screen time. This doesn't mean that if one character gets a magic sword, everyone gets a magic sword. It means that if one player gets a goody, the other players can rest assured that their goody will happen eventually. Everyone gets a turn. One player might get a special item, another player might get a sidekick, still a third might gain an enemy. In game terms, these are all equal (strange way of thinking about it, huh?) but they all give each character/player a time and a place to take the spotlight and excel.

If the last time you fought orcs, they went down with one swing of your axe, then that had better happen next time. If it doesn't happen next time, as a GM you'd better have a good explanation of why (even if the characters and players aren't privy to it.) If you make a decision on the fly that turns out to be wrong or unbalancing to the game, take the time to discuss it with the players and explain why the rules have change. In advance.

Heroes are the Stars

In order to make a compelling game world, you have to populate it with interesting characters (NPCs). A world filled with nameless shopkeepers, guards, and barkeeps is a boring world. Having said that, no matter how wonderful that villain/anti-hero/druid/mage/etc. is he or she is not the focus of the game. The players are and their heroes are. Period. Not every villain needs to get away, not every sidekick needs the coolest magic item, etc. Let the heroes have the spotlight. If there's a legitimate reason why an NPC should have the spotlight (she's the only one who can pick the lock, he's the one who knows a contact in the city) have them take the lead (briefly) then hand the story back over. Besides, if your NPCs start interacting with each other, isn't that really like talking to yourself?

This means that when gaming day arrives, don't be clueless about what is going to happen. I've already mentioned that I like to play it fast and loose, so what does "be prepared" mean to me? Well, I typically have a concept map put together showing the relationships between the heroes, villains, places and things. I have a rough flow chart showing the plot as I envision it. I'm open if the characters want to go in a different direction and I'm ready to improvise, but I have some resources to help me roll with it.

Consider the following: sometimes the ideas that your players come up with are better than your ideas. Steal them. Not only will the players appreciate the better plotline, they'll think that they are really tuned in to the scenario. "I knew it. I saw that coming."

Exempli gratia: Years ago I kicked off my first campaign with an adventure involving a wyrm (a giant flightless dragon.) The scenario involved a wyrm that was menacing caravans on a well traveled trade route. The heroes were hired as guards for a particularly valuable shipment. My ideas was that the wyrm was just hungry and was attacking the caravans as a ready source of horseflesh. Yummy.


Then I overheard my players discussing how the wyrm must be controlled by a mage. They had seen a pattern in the descriptions of the caravan merchandise that was lost/stolen (one I hadn't intended) and had reasoned that a mage must be responsible.
I quickly sketched a cavern complex, reasoned that the wyrm would have a "magic collar" that would allow the mage to control it, and whipped up a small group of brigands that would help the mage pillage the caravans. Presto. Instant improved adventure.

When a player comes up with a great idea that moves the story along, when they immerse themselves in their role, or when they take the time to describe a clever combat maneuver. Try to say YES. If there's a good reason why you don't want them to succeed, then say NO, but have a good reason. If you want them to succeed, don't have them roll dice. Just narrate what happens and move on. If you have them roll, no matter how slim their chance of failure, it could happen. Just say YES.

Furthermore, when they do exciting and fun things, give them a payback. Give them a clue, item, contact, complication, etc. Something that says, "well done, here's another chance for you to shine." You can award them with "metagame" things too like experience points or FATE points. The point is, the award is positive feedback that says "keep it up, keep doing that." That's what you want from your players.

Nothing will alienate you players more than a tricky situation that they can't figure out that eventually kills off their character. They invest a lot of time and energy into their in-game persona. Don't treat them carelessly. Don't kill off a character through a bad roll or bad design. Traps that kill unless the heroes spot them are a bad idea unless the heroes know that the place is filled with lethal traps. Kill off a red shirt to show them how deadly. I like FATE and Fudge because they have "taken out" as the final stage in the character damage track. This could mean that the hero is unconscious or otherwise disabled an not able to continue. Not necessarily dead.

Now if the players do something patently stupid. Kill their character. They're asking for it. If you adhere to a player-centric, story based game where the heroes often get out of tough spots by the skin of their teeth, some players will interpret this as weakness on the part of the GM. "I can do anything and he won't kill me." Wrong. If they are stupid, make them pay for their stupidity. They should have seen it coming. Being fair doesn't mean being a pushover. Just make sure that if a character dies it is either dramatically appropriate (my paladin died fighting the demon queen so that everyone else could get away and all the children would be saved from her clutches) or it is the players legitimate fault (you mean I can't jump off of a cliff? Oh, dragons are deadly. I probably shouldn't have doused myself in gasoline and then lit up a smoke.) Give them the chance to act in a rational fashion, if they refuse, it's their funeral.

Feedly is now my Reader

With the immenent demise of Google Reader, I must say I was totally bummed.  I have TAGS, TAGS and more TAGS setup in Reader and I've not found an easy way to move those.... until today!

If you setup THE SAME TAG in Feedly under your preferences, all your tagged articles COME OVER AUTOMATICALLY from Google Reader.

Feedly doesn't import the tags, but it apparently does read them from Google.

Just wanted you all to know!