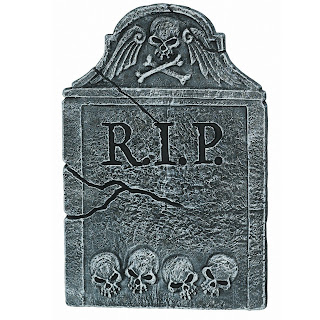 DnD is a funny game.  I know, I know, I'm currently playing Labyrinth Lord, but this game will always be DnD to me.

Anyway, it's a funny game.

If you allow the dice to be "oracles," you never know what will happen and that's the beauty of it all.  The game can still surprise you.

The randomness of the dice allow for an "emergent narrative" that just happens.  It's not a railroad.  It's not a fixed plot-line.  Events transpire and the dice help determine what takes place.

Well, last night, a loyal henchman died.  Sometimes those surprises can be bittersweet.

Trouble is, he didn't die at the hands of a vicious enemy.  He wasn't incinerated by a dragon.  He wasn't killed by fell magic.

He died at the hands of a trusted ally; victim to a fumble.  A random accident.  A one in 2400 chance.

Knand was an NPC that entered our game as the result of a draw from a Deck of Many Things.  You can read a bit about that episode here.   Hanuman was lost to the Donjon and ended up in a cage, suspended above a cavern, with his loyal 4th level fighter Knand.

They adventured together and escaped back into the world and were inseparable.  Knand owed Hanuman his life.

Hanuman grumbled a bit about how fat Knand was, but they relied on each other.

Today, Hanuman, in the heat of battle, accidentally snapped Knand's neck.  He died.

RIP Knand.  You will be missed. 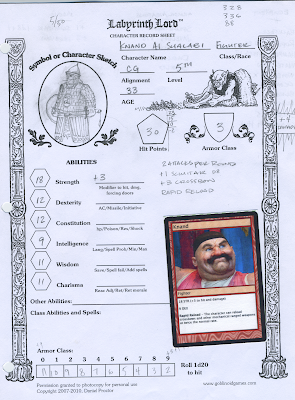 UPDATE:  Here's a link to a remembrance of Knand.

Hanuman is a monk and he was in a close combat fight with a Shambling Mound. Knand had taken damage. Hanuman crit fumbled his attack and the only other target nearby was Knand. The hit did max damage to send Knand on the "death chart". On the Chart he rolled "Broken Bones". Jim has a body placement hit Die. Hanuman rolled and "Head" was the result... it was a cascade of the worst rolls you could achieve. 2 "1"s in a row on a d20. A 12 on a d12 for max damage. A "7" on the death chart which is broken bone (which isnt bad by itself... lucky in fact) but then he rolled "Head" which resulted in the snapped neck.

Despite Knand being an oily, fat, clumsy bastard. He will be missed for sheer comic relief and brute strength he brought to the adventures when he was around.

Tears come to my eyes when I see his character sheet. Poor fat Knand. I just wrote his obituary on my page. The authorities will rule this an "accidental" death, but such an incredible sequence of events begs the question, was Hanuman sick of Knand's filthy habits? Did he despise the debt that he had created by saving Knand in the first place? Does a 6th level martial arts master really "miss" that badly? Or was it a perfectly orchestrated plot to rid the party of excess baggage?

We may never know.

Sorry but I'm memorized by a detail. Is that card printed out? or just digital? or? How'd you make it?

@Trey -- I think that Dave answered your question. :)
@Dave -- Thanks!
@Thanatos -- Thanks!
@Norman -- I used "godeckyourself.com" and I uploaded a picture that Lord Thanatos gave me. I print out cards for every player. The cards start off as a digital PDF file though...