A few weeks ago, I saw this great series of posts about Polyhedral Pantheons at KJD-IMC.  It got me thinking about dice and how you could make a matrix connecting NPCs within a campaign.

Then I remembered that great party game Scattergories.  It has a d20 in it that has various letters of the alphabet instead of 1 through 20. 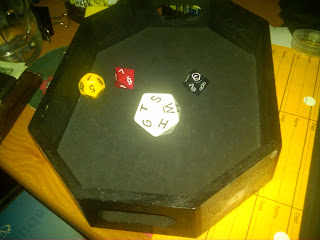 Seems to me, you could look at the die and create a matrix -- each face touches three other faces at the edge.  You could create a list of names (using each letter) and you could randomly create some information about each NPC.

Here's my list of names.  I used Chris Pound's Name Generator for the names.  I just picked off the list based upon the letter.

I rolled in the back of my Wilderness Alphabet to randomly generate characteristics.  I wanted each NPC to have a unique role, so I re-rolled occupations.  I also stopped rolling "noses" after about the third or fourth one.  :) 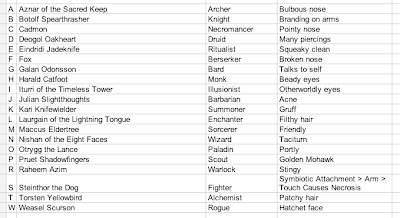 Here's a matrix of how the NPCs know (or are connected) to each other.  Further fleshing out during the game will be necessary. 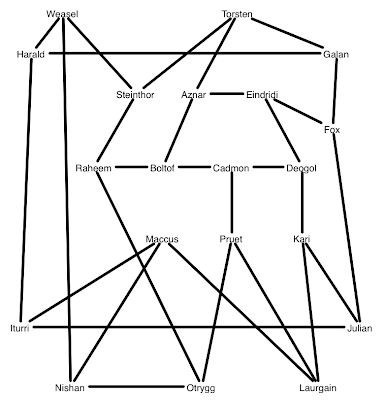 Depending upon the granularity of your game, you might have a separate matrix for the Wizard's Guild, the Thieve's Guild and the Merchant's Guild.  Or, you might just have one matrix for the city/town/hamlet as a whole.  You can decide.

Now, when the characters are looking for information (or whatever) you can grab that big d20 and roll...

"Oh, a 'G', I guess that Galan Odonsson, the Muttering Bard, knows something..."

"Who else is after the Scarlet Cloak of Eldradiss?  'J'  Julian Slightthoughts, the dimwitted barbarian..."

You can order replacement Scattergories d20s here for $2 each.  I faxed my order in on a Thursday and I received my d20s on Monday.  No shipping either!

Thanks for the love on the Polyhedral Pantheons. I have only skimmed your article on how you're adapting it, but I greatly like where you're going with it.

I have to get back to work, but I've bookmarked this for further consideration when I get home. I think I see some potentially happy ways to tie this into the setting and scenario design stuff I've written -- that's all about relationships between entities (including characters).

You might consider adding something like 'nature of relationship' to the edges. I see Aznar is related to Torsten... are they friends, rivals, enemies, colleagues? Is this necessarily a reflexive relationship (Aznar likes Torsten, not realizing that Torsten is murderously jealous about something and is waiting for his opportunity to Make Things Right...)?

@Keith -- Thanks for the inspiration! See part 2!

Incidentally, Jim, I recently found a lettered d30 (with four 'wild' faces). I now have two of them.