[Finish It Friday] Varlets and Vermin - a review

(Dear Reader, I'm looking at my DRAFTS folder in blogger and I'm trying to finish posts that I began some time ago.  This is the first in that effort!) 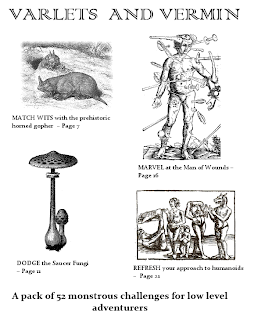 Back in May (of 2010 or 2011?  I don't remember now...) Roger the GS at his blog, Roles, Rules, and Rolls, posted a great low-level monster book called "Varlets and Vermin".  I didn't see it back in May (don't know why) but I stumbled upon it a week or two ago.  Since then, I've printed it out and turned it into a booklet.  I've really enjoyed reading through it and I think it has some great monsters in there that can add real excitement to an adventure.

Roger sets the book up with the following sections (I think they are fairly self explanatory):

At the beginning of each section, he sets the stage with a brief paragraph that lets you know what kind of monsters to expect.  I found this one to be quite amusing:

In a world with ear seekers, throat leeches, trappers, lurkers, mimics and all the other deceptive tricks of the dungeon, the fantasy world hardly needs any more annoying critters to throw at players. And yet, here they are.


Each monster is statted out  for Swords and Wizardry (but they are easily translatable to other OSR games) and he writes a short description that gives you a bit of background about the origin or nature of the beast.

Each of the monsters has something new or clever to offer.  If the monster has new mechanics associated with it, they are clearly described and explained.  As I read, I found myself thinking about my bi-weekly CotMA game and how I might strategically place some of these beauties into the dungeon.  In the bottom half of this post, I have added some notes about how some of Roger's monsters did in play this week.  :)

Appendix A: Half Man, Half Amazing offers seven different combat tactics that you can use to differentiate between hordes of monsters.  Roger offers this advice:

The secret to making groups of humanoid warriors memorable is to treat them as military cultures, not species. Give each race a different tactic, a different motive.

He gives useful descriptions of Rabble, Warbands, Fanatics, etc.  This Appendix could see some serious use as I make different tribes of orcs, hobgoblins and other humanoids behave differently in CotMA.

In Appendix B: Ten Tamed Titans, Roger takes ten dangerous challenges and brings them down to a level that beginning adventurers can handle.  Some of the challenges start off tame but become more dangerous with time.  Others become more like tricks or traps than monsters to defeat.  My personal favorite is the "Mimicking Golem".  Great stuff!

I couldn't recommend this little book more.  Click on this link immediately and visit Roger's RRR blog.  The link for V&V is on the right hand side of his page.

Great review of a great book. I, too, was blown away by the quality content in this little gem of a game aid.