I went out to Target tonight to buy dog food and I found myself drifting over into the toy section.  I like to take a look around at Target because in the past, I've found Heroscape on clearance and other games as well.

So, what did I find?  Lego Heroica! 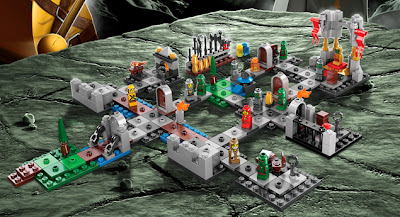 This is the Castle Fortaan set ($30)
Target had two of the other sets, but not the Waldurk Forest, which is the other one I really want... Actually, who am I kidding?  I'll be buying all four...
You can download the rules here (check them out!)
Anyway, I busted open the box, which is quite sturdy and will store the game well for some time to come.  Inside, I found four bags of Lego parts, a rulebook, a scenario book and the instructions for how to build the set.
You only have to build it once -- you can disassemble it and store it in the box for future play.  The pieces build out like dungeon tiles and corridors.  You can assemble it nearly any way you'd like.  There are three "scenarios" or dungeons in the book.  Each one is set up a little different and each one shows you where the monsters are and where the magic items are.
There are four characters, a barbarian, a wizard, a druid and a knight.  Each one has a special ability that sets them apart.
The game is played by rolling a really cool Lego die and reading the "pips" to move.  Then, if you are adjacent to a monster, you roll the die again and read the "symbols" to determine the outcome of combat.
You can find gold, magic potions and magic items.  You can search chests -- some are trapped and some have treasure.  You have to find keys to open locked doors.
I convinced my wife to play and the game was quite fun.  It requires a bit of teamwork at the start to get past the locked doors and the monsters (there are quite a few to defeat on the way).  At the end, I was in position to take the throne when my wife's wizard blasted the goblin king to oblivion.  Huzzah!  It took about 20 minutes to play one scenario.

The whole game is good.  It's not complicated and I can tell that it has a bit of replay value.  Kids will probably love it.  I really liked it.

What Would You Hack?

There's a rule in the game called "Battle Heroica."  One player runs all the monsters.  Sound familiar?  If I ran that version of the game, I wouldn't lay the whole map out.  I'd build it as you go.  Sound familiar?

I could also go digging through my Lego box to find a bunch more bricks to make more tiles...  :)

You literally could use this as a dungeon representation at a tiny scale.  One "stud" being 5' of actual scale.  The little guys could be used to set up a marching order very easily.  The abstract nature of the old school games would work perfectly.

If your Heroica hero "dies" you just kinda have to sit there until you regenerate.  You could give monsters a number of hits to kill (instead of just dying after one) and you could make all monsters do 1 pip of damage (some do 3 and you only have 4...), but when you're dead you're dead.  Would make defeating the adventure a bit harder AND more rewarding.

You could easily add new kinds of magic items, potions, monsters, traps, etc. to this game if you have the Legos to do it.  Of course, you could go all "abstract" and forget about the Legos.  In actuality, if you turned this into a campaign game, a little character sheet would make that easier.

All in all, great game, lots of fun and lots of ways to tinker (don'tcha just love tinkering?)

This game looks lovely. But sadly, it appears that lego have no intention of selling in in Australia, which means I'll have to go without. :(

That's interesting. I like your idea of building the dungeon as you go, and hacking it with other pieces. I saw that 'stud' piece, which takes up the space of an old 2x2 piece, over the holidays when I hung out with my niece and nephew who have inherited all my old Lego stuff and mixed it with their newer custom stuff. They don't fully appreciate my Legos since they're little bastards.

But back in the day we'd achieve the same affect as the stud by sticking a single round dot or one of those antennae pieces in between the bits on a 2x2. Seems like you could build the dungeon with any flat pieces, and stick one or two little round bits on the bottom and not need the stud pieces.

Probably not news to any Lego fan older than 15 yrs.