In my CotMA game, I use minis.  I make no bones about the fact that I like them.
I also like battlemats and dungeon tiles.  The problem with the battlemats and dungeon tiles are the SQUARES.  It's very easy to get hung up on the 5' squares.  I'm sure we can get past it, but in the interest of trying something out, we skipped the squares and used Jenga blocks for the dungeon walls in our most recent adventure.
I've posted about making my own battlemats before.  I have a "battlemat" that I used years ago when I ran a FATE game.  Combat is very abstract in FATE, but I still wanted some kind of representation.  Basically, my FATE battlemat is a large piece of white vinyl with no markings.  You can write on it with wet erase markers, but there are no squares or hexes.  I put this down in case we needed to draw something and to protect the table from all the rolling dice.
It turns out that there are some advantages to using Jenga blocks for mapping.
In addition, these will kinda mesh with my previous post about using blocks in games.


Overall, the reception to the Jenga blocks was positive at the end.  I think we'll keep using them for awhile and see how their use holds up over time.
Here are a couple of "re-created" pics to show how the blocks look in play. 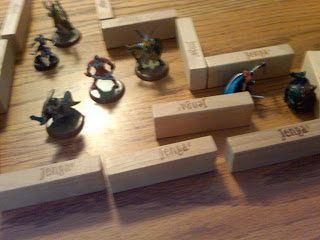 The rogue has found a pivoting secret door that opened to reveal a dark altar... 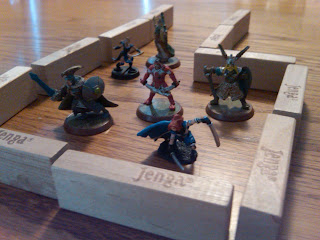 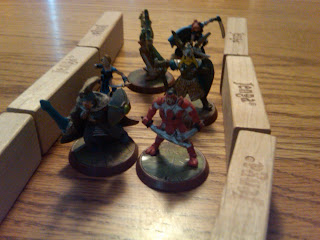 Also, in the TV series, FREAKS AND GEEKS, the characters play a game of Dungeons and Dragons. You can plainly see in these screencaps that the DM is using dominoes to represent the dungeon.  I hear that this was common back in the day, but we never did it.  Dominoes might be a little easy to tip over in use, but maybe not. 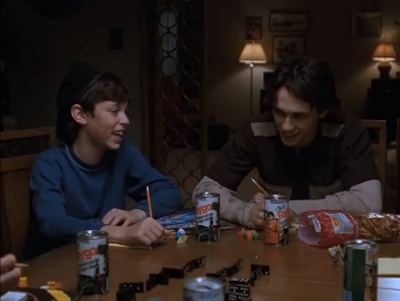 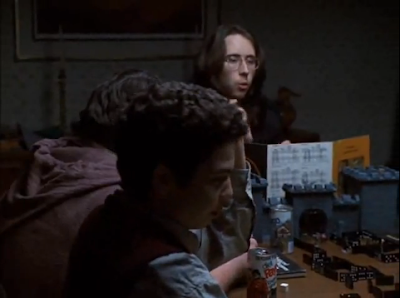 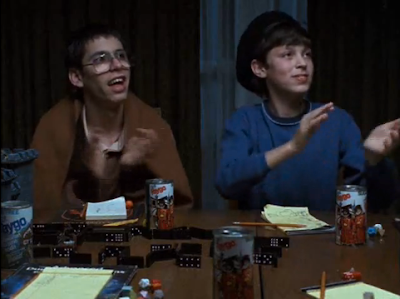 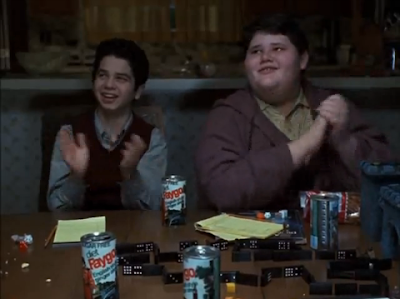 Here's the segment of the episode that includes the adventure.  Enjoy!

Great episode, I never caught them using dominoes for Dungeon Walls. A previous DM of mine used the heck out of Jenga Blocks for just the purpose you are talking about. It worked out really well for us.

Cool idea with the Jenga blocks, and I like how you're using Heroscape minis as well.

I remember an old Judges Guild module that recommended building the dungeon out of Legos.

Oh, and thanks for the Freaks and Geeks clip. I'd never seen that before.

That was an awesome scene. "You got a problem with that, Gorthon?"

Very interesting technique! I may just steal it!

But jenga blocks are 7.5 cm, that's 15 feet in D20 style 5 foot squares. I'll have to put some thought into the best way to ignore that. I think I'm over thinking things.

Jenga blocks? Genius! Simple, quick, and a-plenty! I think I'll be trying this in our next session.

Srith of the Scrolls said...

I've been trying to think of a way to visually represent the dungeon with fog of war.

Because when it's all mapped out on a piece of paper or dry erase mat, the PCs can see the whole dungeon and will never get lost, feel the need to map on graph paper or take a wrong turn when fleeing from some monster.

This should work nicely. Instead of reaching for new blocks each time, just disassemble rooms they can't see to build the new ones they enter.

I was introduced to using dominoes for walls by the MIT gamers.

Jenga blocks sound nice also, though they are a bit bigger.