I enjoy reading and hearing about how other DM's go about creating their adventures.  My process has evolved over the years.  I don't know that I have a "set" process, but in this post I'll tell you a bit about what I did to create a recent adventure.

Sometime in or around 1986, I dispensed with all that and I wrote up adventurer that were a lot more sparse.  I filled in the gaps at game time.  Sure, I thought about what I *might* do, but I also listened to my players, read the room and tried to live up to expectations.  I've shared an example before where my players gave me a better idea than I actually had -- AND I STOLE IT ON THE SPOT.

Ultimately, I've learned that overplanning is simply a waste of time.  It's better to hone your improv skills and try and be flexible during the game.

This lesson was reinforced just a week ago by my CotMA group.  I sent an email around and tried to get a sense of *where* they were heading during our next session...  Would it be level 2, 3 or 4?  Would they go seek out the wizard's keep?  Something else entirely?

Nope.  They went to level 2.  Lesson reinforced (I hope I can say learned...)


So, back in March, I had an unavoidable meeting on game night and the CotMA group agreed to get together from 7 - 10p for an abbreviated session.  I decided that the session would have something to do with my favorite DM tool, the DECK OF MANY THINGS.  :)

One result of that night was that Oryx, their doughty dwarfin warrior drew "The Void" and was suddenly without a soul.  What to do?

I informed the player that he would have to go on a "quest" of sorts so that his soul could escape the void and be reunited with his body.  Instant side adventure and an opportunity for improv.

Here's what I did.

I went to Dave's Mapper and I loaded a map.  I looked at it with one purpose in mind -- WHERE IS THE EXIT?  Where is the goal that Oryx's soul will be looking for.  I found it in this map: 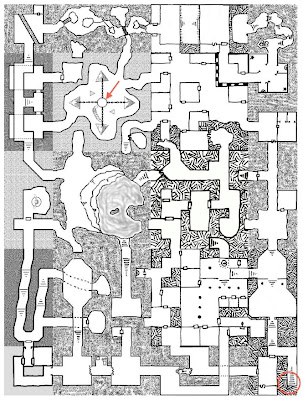 Can you see the "gate"?  It's right there in the upper left geomorph by the red arrow...  Just climb the stairs and jump through the ring...  Oryx started on the stairs in the red circle.
We were playing this adventure via email, so I loaded it into Queeky to reveal the map a bit at a time.

But how to stock the dungeon?  That's where Risus Monkey's "Dungeon Words" came in.  I used random numbers generated here: http://www.pbegames.com/roller/ 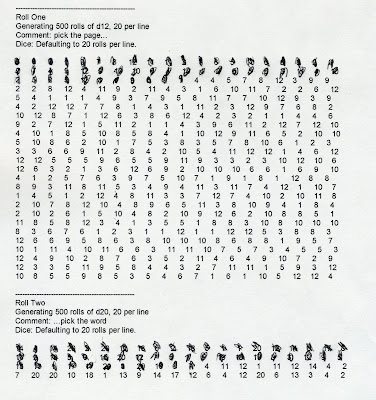 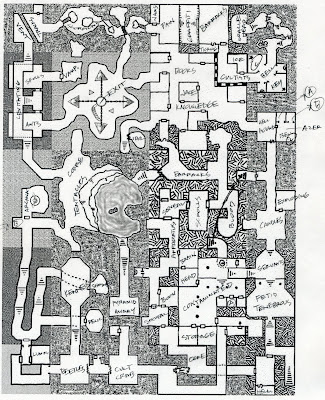 Once I had a map with some ideas on it, it was time to look for patterns or connections or something.  Sometimes a word suggested another word in my head and I used that.  I had a preconceived notion of a connection to Oryx's "Azer" heritage so I had to put that in there (I think you can find that room -- more on that later.)
I started jotting down some rough notes (about 2 pages) that could remind me of the connections I discovered: 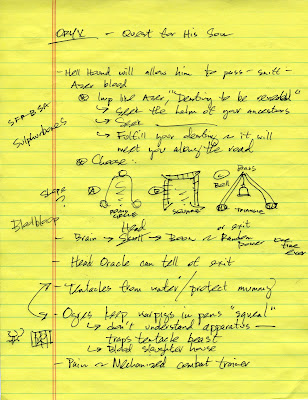 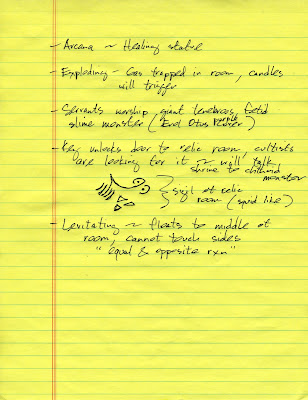 Here's another neat trick.  I needed a name for Oryx's little imp-like Azer mentor (kinda like Yoda made of magma).  I had no idea what to call him.  I used some dice rolls on the DungeonWords tables and just took the first letter of the responses.  The letters I got were: SFRBSA.  I stared at those for awhile and I decided that I should call the little hothead, "Sulphur Bones".  His hellhound turned out to be Ashfang (just pulled that one out...)  Anyway, that's another really cool trick.
All in all, the adventure was a huge success.  Oryx is now in full possession of his soul.  He lost a level due to dying in the void, but he regained about 4000 XP for the experience.
Here are some pictures of the finale today.  Enjoy! 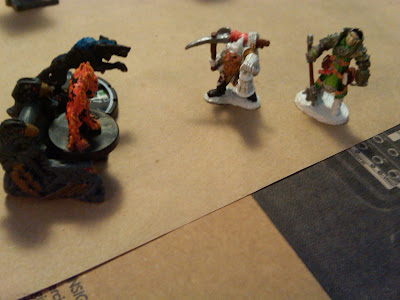 Oryx and Jace parlay with Sulphur Bones and Ashfang. 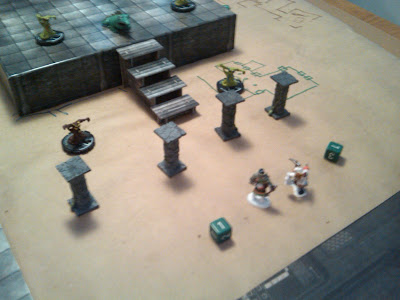 Oryx and Jace face down with the lizard-slime, Bloolbloop and his ooze minions. Oryx goes hammer to tongue with Bloolbloop who is dead set on having his "maaaain cooourse."  Eventually, Oryx will wrap his tongue around a pillar and that get's his attention... 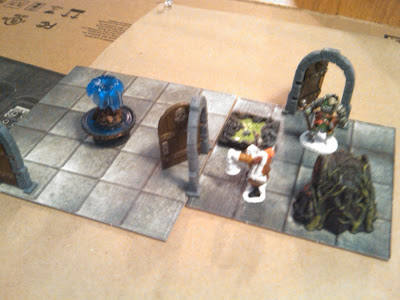 Oryx and Jace take the brain out of the fountain of spinal fluid and dump it into the statue with the empty head.  The statue then gave Oryx cryptic directions for how to exit the dungeon.

I feel like an Illithid that just consumed your brain. Tasty!

THANKS for this revealing look into your process. I totally agree about the value of relying on improv skills and stealing player ideas -- these are techniques I heavily rely upon as well.