After an uneventful night and healing most of their hit points through rest, the adventurers head out in the morning toward the mine.

The heroes followed the known path, but they were going slowly, looking out for hobgoblin patrols.

At one point, about 10 miles away from the mine, they encounter one, heading back toward the mine.  It is composed of 4 hobgoblins and one ogre.  At one point the hobgoblins shout some commands at the ogre and he obeys.  (one player notices this)

The party shadows the hobgoblins back to the mine.

The hobgoblins whistle, as they approach the trees just outside the mine, then they go inside.

Before they decide to attack, Halfdan scribbles out the lay of the land (he and his brother dug the mine.)

"I dunno if the hobbos have done any more digging, but this is wha' I know..." 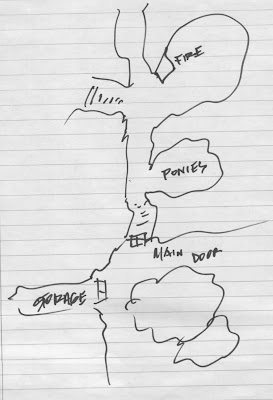 "Who knows wha' they are doin', but I bet they're still cookin' in the firepit."

The party does some thinking and asks about how the hobgoblins look.  Can we disguise ourselves as hobgoblins?  Maybe wear their armor?  Will that work?

I tell them that I can't judge hypotheticals, just actions.  If they'd like to try that, they should try that.  Hobgoblins are around human sized, not dwarf or hobbit sized though.

What about their faces?  Do they look like us?

No.  They are kind of orangey and they have pig noses.

They decide to pull a Hannibal Lecter and cut off their faces to use as masks!  Ugh.  Gotta admire their creativity though...

One player says, "What about the commands they shout at the wolves and at the ogre?  Do we know those words?"  I say, no.  You don't know hobgoblin (presumably).  You can try and see if you remember what they said.

I do a quick assessment of the various INTs in the party.  I tell them that only the cleric is smart enough to try and remember.  Roll d20.  He rolls a 5, which is significantly below his INT.  I tell him he thinks he remembers the sounds of the grunts he heard for the ogre and the wolves.


The party readies itself and heads toward the trees.  They forget to whistle...

...and the hobgoblin archers in the trees start shooting!

The party shoots back, eventually wins, but the fighter is at -1 HP.  He is dying...

I allow PCs to bandage their wounds one time after each battle.  1d4.  For the dying or unconscious, they need someone to do it for them.  IF they get back to positive HPs, they get to soldier on.  If they don't.  They are dying.  Healing magic is all that can help now...

So, the party has its two "disguises" and the two humans don the hobgoblin armor and "faces."

The halfling and Halfdan the dwarf, wait outside...  The cleric takes a signal whistle from the hobbit -- just in case -- and they head into the mine.

As they approach the room that Halfdan said was used to stable the ponies, the adventurers find a wolf chained to a wall.  It starts to sniff the air...

...the cleric shouts the "wolf words" and the wolf backs down.  It still keeps sniffing...  the adventurers hurry past.

They smell the aroma of cooking turkey...  the mine halls are lit with a few torches...

They approach the large room and they see a hobgoblin cook, with his back to them, stirring a large pot.  Turkey stew is the guess.

They shoot and kill him.  He slumps into the pot, bending over at the waist.

They hustle across the room and move the body toward the pile of skins and straw that is the ogre's bed.  They start hiding it under the bed when the ogre returns!

Battle ensues.  The ogre deals a punishing blow to the fighter and down he goes.  The cleric starts whistling!!

The footrace is on, will the dwarf and halfling manage to aid the cleric before the ogre kills him?  Will the hobgoblins manage to reinforce the ogre?
-=-=-=-=-=-

As it turns out, the cleric manages (luckily) to stay unkilled (the ogre kept missing) until the dwarf and hobbit arrive.

The hobgoblins were deeper in the mine and were unable to hear the whistle, so no reinforcements were coming.

The dwarf finished the ogre (in desperation) with his boomstick.

The hobgoblins DID hear that.

The adventurers grab the fallen fighter and rush out of the mine.  They assume that the hobgoblins are on their tail and they move as fast as they can back toward the ruin and away from the mine!

This concludes the first session.  We play again tomorrow morning 6/14/13.