So Boss, the halfling fighter, escaped the medusa and made it back to The City.  He needed to find a few more party members, so he looked up his buddies Maul of the Frigid Wastes and Deogol, a fighter and a cleric respectively.

These three formed a plan to go to the ruins, but first they needed to find some hirelings.  Reinforcements for the exploration!

They paid a crier 5gp to put up some signs and drum up some interest.  The interviews were to take place in two days at the Silver Eel Tavern.

The adventurers got five applicants (Thanks Meatshields!) and they hired four.  Three men-at-arms and one torchbearer.


Here's a technique that I really like.  Rather than use the HPs on the Meatshields page, I let the players roll up HPs for their men-at-arms.  I told them to roll 2d6 and keep the best one.  One hireling was strong from his labor as a farmer.  I let them roll 3d6 and keep the best for him.  The torchbearer rolled 1d6 -- and got a 1!

I told the players that they needed to buy their men-at-arms AT LEAST leather armor and some kind of weapon.  These were theirs to keep.  They had to pay their wages up front as well.  They needed to buy them food for a week and they might want to buy them something to ride.  They didn't have to give that to the hireling, but they'd certainly be impressed.

The group bought a bunch of gear -- torches, rations, mounts, etc. and they headed out.

The journey to the ruin was uneventful.  They saw no one on the road.  The weather was good and they arrived at the ruin by mid afternoon.

The torchbearer, Morig exclaimed, "You didn't say you'd be exploring the Egg of Evad!" 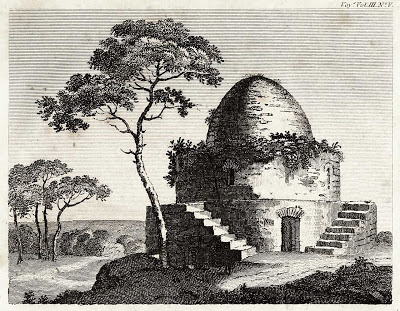 The adventurers tied their mounts to the tree near the ruin and climbed the left stair (careful to avoid the trap.)  They had a small fire, ate their rations and hunkered down for the night.  The group assigned each of the men-at-arms a guard duty shift.

I randomly rolled to see if the guard fell asleep AND if there was an encounter.  Neither thing happened.

When the adventurers were ready in the morning, I asked the players what they intended to do.


These are new players, so, I didn't coach them on *what* to do so much as guide them into thinking about their options.  Sure, they could go down the elevator room, but what about the other two doors into the Egg.  Do you want to explore them?

The party settled on exploring the door at ground level (the middle door.)

A listen at the door revealed some dripping water.  The door itself was made of stout wood with rusty iron bands.  It took several tries to force the door open.

Daylight revealed a narrow, damp staircase down.  The stones were a bit slippery from the dripping damp.

Boss the hobbit took a torch, and moved carefully down the stairs to the point where the sunlight stopped.  He could see another 30' into the darkness and the stairs kept going down.

He called for the rest of the party.  They moved carefully toward the bottom of the stairs and then on down the corridor.  They stopped when they saw another door some 30' distant on their right. 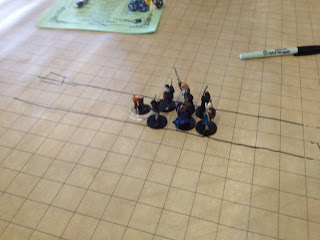 Cautiously, they approached.  The door was stuck and it took Maul four tries to force it open.  Each failed attempt generated a random encounter roll, but nothing appeared.  Whatever is inside, if anything, is certainly aware of the party!

Beyond the door was a small 10x10' room.  Two manacles were attached to the wall inside the chamber.  Another door could be seen on the opposite side.

Maul was more successful with this attempt and the door opened right away.  A gaunt, skeletal wolf with strips of rotting flesh covering its face and back, leapt to the attack.  Maul and Boss blocked the door and fought with the beast eventually defeating it.
When the  battle was over, the party looked around the room.  They saw a purple blanket in one corner.  Deogol investigated it, poking with a spear.  Purple spores erupted in his face.  He made his saving throw and stepped back from the purple mold, sputtering and coughing.  The room now smelled faintly of rose petals.