The adventurers figured out that there are two entrances to the "medusa" chamber.  How big it is, who knows, but if one person went in one way, they could cause a distraction.

The others could gang up and attack the monster without fear of being turned to stone!

Tom, the cleric, volunteered to cause the distraction.  He would be blindfolded and carry a torch.  He would make a ruckus and get the monster to come toward him.  The rest of the party would attack with surprise and try to defeat the monster.

They couldn't shout at Tom to let him know when they were in position, they would send a goblin back.  They'd attack when they heard him shouting and they saw a light enter the chamber...

The party got into position.  Tom at the east end and the others at the north end -- 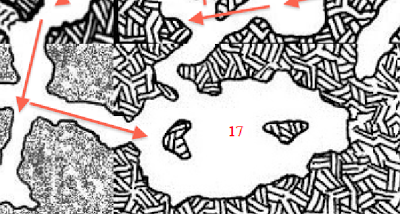 Once the attackers were ready, they sent the goblin back and waited for the noise.  Tom didn't disappoint...

He started hollering and waving the torch around.  The attackers, Halfdan (with an oil flask), Boss the hobbit fighter and Gork the goblin, prepared to assault.

As the slithering snake lady got closer to Tom, they let fly!

3 of 4 arrows hit and so did the oil flask.  I told them all to roll their damage at once.  They did an impressive amount of damage, but the snake lady didn't die.  She attacked Tom.

A HIT!  Save versus poison!  FAIL!  Tom died screaming in horrific pain!

The attackers slammed their eyes SHUT!

They all started flailing about wildly with their weapons, hoping to keep the snake lady at bay.  Afraid to open their eyes lest they be turned to stone.  The characters shouted at one another to make sure that they kept away from each other's weapons.

The snake lady slithered toward someone...


Here's where I had a flash of inspiration.  I looked into the cupboards at the house and I found a small box of gumballs.  It was like a cardboard milk carton with gumballs in it.  I told the boys to close their eyes...

I rolled a d6 to secretly determine who she attacked.  Boss!  I rattled the carton near his ear!  THEY ALL JUMPED!!

Once the rattle happened (it's her tail!) then they could open their eyes to watch the dice roll.  She had a big bonus to hit (they have their eyes closed!) and they had a penalty for the same reason.

I continually asked them after each round if they wanted to try and flee, with or without their eyes open.  They always said no.

She missed!  They all got a chance to attack.  Misses!

There was a little moment of silence.  The boys had already had the loss of Phantom (he died under the tree) but I don't think they thought I'd kill Halfdan!  Yep.  Dead as a doornail.

At this point, Boss is all alone.  I took a minute to talk to his player.  I told him to think about his position.  Do you run? Do you fight?  Do you open your eyes?  Where do you suppose she is looking right now?  At you?  At Gork?

He said he'd open his eyes and he'd take two arrow shots at the snake lady.  Hopefully she'd be looking at Gork.

I told him that she wasn't looking at him, yet, and yes, I let him take two shots...


They buried Tom, Gork, Phantom and Halfdan in the chasm.  Made a little shrine with candles and carved their names on the wall next to Krag's name.

Boss took a bag of silver ore (1500 sp), Halfdan's boomstick and a potion that he found in the hobgoblin leader's room.

He left everything else, the mine and all, to the goblins.  They needed a home.  He was always welcome back as a "goblin friend."

He took both ponies and rode back (cautiously) to The City.  (I rolled for random encounters on the road and there were none.)

Being the only survivor of the Expedition to the Mine of Kaladon, he received all the experience.  Boss is now a Level 2 fighter.

The other two boys rolled up new characters.

Well done! Sounds like they had alot of fun!

Sounds like the took the death of their characters very well. I don't know if I would dare that with one of the 12 y.o. in my campaign. Well done.

@Bill -- Thanks. Saw the boys on Saturday at a BBQ. They were still talking about it.
@Alan -- Yes they did. I told them I was proud of their reaction. We did talk about the dangerous nature of the game up front... AND... they did have a TPK on Matt's birthday... Then again, they were just 1st level. We'll see how they behave if an experienced character dies...