The adventurers fell back through the forest along the known path.  They moved quickly and they seemed to evade any hobgoblins who may have been in the area.

They retreated toward the ruin at C, when they again encountered a hobgoblin patrol.

This time, the hobgoblins seemed to be looking for something or someone else.  There were four of them, with spears searching through the undergrowth.

The party (wisely) waited and watched from a distance.

The hobgoblins eventually routed their quarry from the underbrush -- A TURKEY!  They began to chase the bird in a direction AWAY from the ruin.

What luck!  (I rolled randomly a couple of times to determine the disposition of the encounter)

Once the hobgoblins were sufficiently far away, the party cautiously approached the ruin. 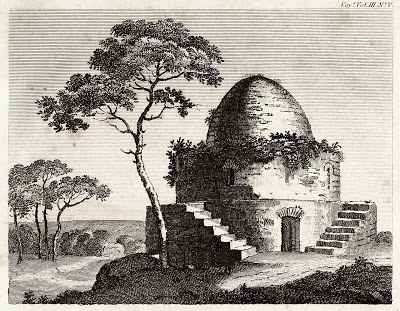 I described it as a stone structure with three entrances, each sealed with a stout wooden door.  One entrance is at ground level (as seen above) and there is one additional entrance at the top of each stone stair.  I scribbled a map and I showed all the players the picture --
Now, I placed the ruin on the map, but I really didn't foresee the adventurers getting here so soon.  (I told the players to discuss their options and I excused myself to the restroom for a quick think!)

Initially the party was content to hide behind the left stair, somewhat in the shade of the ruin and out of sight of the hobgoblins.

Curiosity got the better of them and the cleric decided to explore -- despite the fact that he was injured.  :)

He failed the save (not that it mattered).  I described how he stepped on a stone stair and it clicked down.  There was a puff of air and a popping noise, but nothing happened.

At the top of the stair, he took time to look over the door for anything unusual   Nothing.  He decided to open it.  He had to force it with strength.  It took two tries.  He opened the door a little... 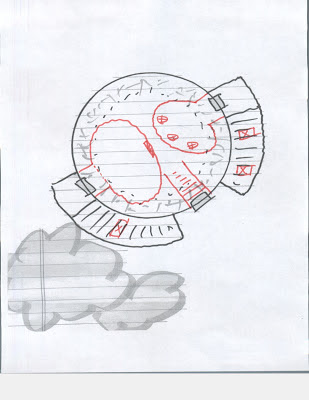 I described the room as oval shaped with a faded mural painted on the wall.  On the far side of the room is a plaque or sign.  Too hard to read in the dim light from the partly opened door.

At this point he remembered that the fighter has a 10' pole.  He lit a torch.  He cautiously used the pole to pick his way across the room.  He discovered a crack in the floor just inside the doorway and that the crack extended all the way around the room.  The players were pretty much in agreement that the floor would move -- but how?

The examined the plaque on the far wall.  Discovered the strange (unreadable) runes and the three buttons. 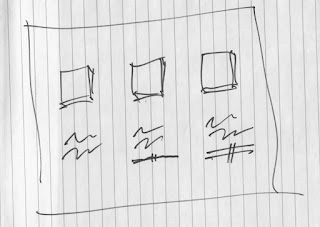 Not wanting to push the buttons while in the room, the cleric exited the room and took aim at the leftmost button with his crossbow.  He took his time and aimed... and missed.  He tried the next buttton.  Miss.  Next.  Miss.  Back to first.  HIT!  The button stayed "clicked in."

With a grind and a poof of dust from the crack around the room, the floor descended into the darkness...

The cleric tossed his torch in the center of the room.

The floor had descended 25'.  The murals had extended downward and were much brighter than in the top room. (No one asked for details... which is fine...)  There was no apparent exit from the room at 25'.

The murals continued downward.  On the far side of the room, where the controls were at the top, stood an open archway. 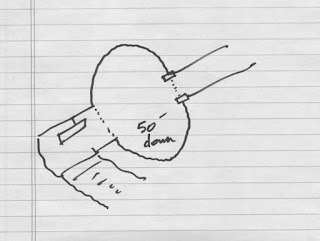 The cleric, deciding he could use some help, asked the halfling to join him at the top of the stair.  He asked if the halfling would try and shoot the third button.

"Sure!" he said as he took aim.  Twang!  HIT!  CLICK!  The middle button popped out and the rightmost one clicked in.

There was the echoing sound of moaning from the bottom and the torch, which had been laying in the center of the descending floor, was snuffed out by a dark, hunchbacked shape...

The groans continued from the darkness below...