I went to Goodwill the other day and I found this game for $1.99.  I'm always on the lookout for games that have funky dice or some other interesting feature -- 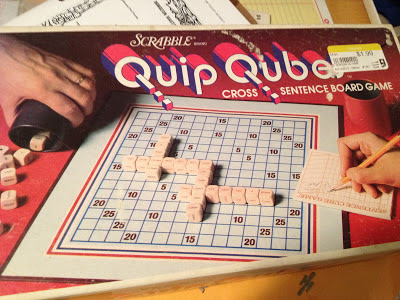 It's called "Quip Qubes" and it's like Scrabble, but with words instead of letters.  I don't know if it is playable.  There is a score pad in with the game.  One sheet has been used (it's still attached.)  I don't know if that means that the owners just gave up or that they never played again for some other reason.

So, I went through the dice and I picked out 16 of the best "words" to suggest action and/or adventure. There are other dice that are suitable too -- this is just one possible set.

I put them in the Boggle case I have and I gave them a shake.  Here's the result -- 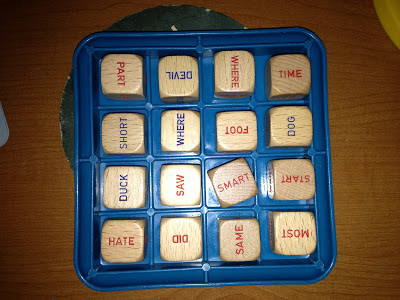 So, taking a look and trying to make connections -- 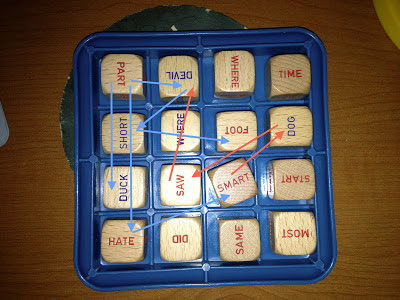 Somewhere in town, lives a smart dog.  Not your average smart dog, a REALLY smart dog.  Maybe a former familiar or perhaps a fey dog.  It has seen a devil.  A small, one-foot-tall devil that is part duck (or at least it looks that way.)  The devil knows about the dog and it hates it.  It knows that the dog will be trying to find a way to destroy it, if it can find a way.  It's only a matter of time...

Not bad.  I could work with that.

These dice might do better if I refine the set and include a few Rory's Story Cubes to help flesh them out.  I'll try that sometime.