In the morning, Halfdan met the adventurers and provided each of them with a mule to ride.  They headed North, out of the city.

I rolled for a random encounter in each hex they crossed.  Less dangerous encounters near the city, more dangerous in the wilds.  They didn't have any chance of getting lost because Halfdan knows the way.

Here's the map that was created -- 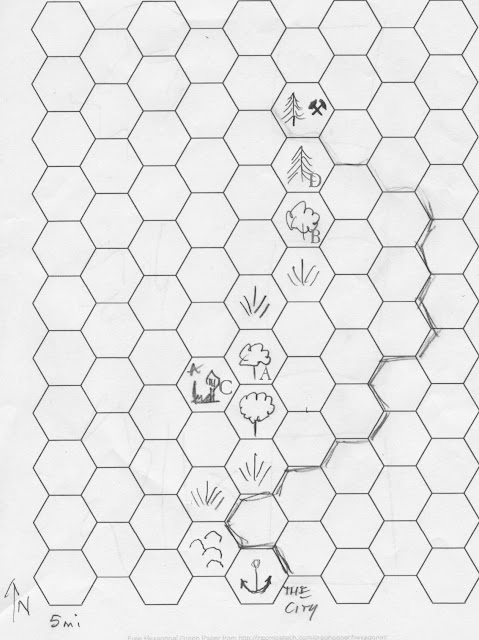 As they moved north, I rolled for an encounter then I drew the terrain symbol and described the lay of the land.  The travel was uneventful until they entered Hex A.

At this point, they encountered a hobgoblin patrol of one wolf-handler and two wolves.  The wolves snarled and leapt to the attack at the sight of the dwarf, so the battle was on!

The fighter and the hobbit made good use of their bows to fell one wolf and the hobgoblin handler.  The other wolf fell to blows from Halfdan and the cleric.

Halfdan warned the group about an evil ruin to the West.  He said they should avoid it if they could.  He told the hobbit to climb a tree and take a look.  I showed the hobbit player this picture --
Halfdan urged the adventurers to continue on.  They would need to travel the rest of the day to get close to the mine.  They would camp overnight and head to the mine in the morning.

Travel proceeded quickly until they got closer to the mine.  At hex B, they encountered another hobgoblin patrol.  This one had three hobgoblins (one an archer) and two wolves.

The battle went quickly, but the cleric was badly wounded.  Halfdan too was badly injured and he was forced to use his "boomstick" to kill one wolf.  The other wolf ran away into the woods.

Fearing that other hobgoblins were nearby and would be attracted by the sound of the "boomstick," the party agreed to fall back.... to the ruin.

"Dem Hobbo's won't want to get too close to dat place," Halfdan said.  "We might be safer there..."