My grandson Matt turned 12 in March and he asked me to run an adventure at his birthday party.  I posted about it here.

Well, summer arrived and he asked if I might run some games for him and his friends while they are out of school.

I wanted to run a sandbox game for the boys, much different than the pre-prepared one-shot I ran for Matt's birthday, so I prepared a bit.

The first idea I had was to gather images of the people, places and things the adventurers might encounter.  I blogged about that here.

Then I headed over to Wizardawn to create some adventures.  TIP: the site works great in Firefox and Safari.  Chrome won't allow the printing of background images (an acknowledged flaw) so the maps don't print.

I'm a big improviser.  I enjoy the uncertainty of what will happen next.  I don't like pre-planning too much; I enjoy being surprised too.

I started with a campaign area map.  I used the World Map tool.  I put ocean on the East and mountains on the West.  I tinkered with the size (30x40 I think) until it fit well on one sheet of paper.  Here's the result.

I then went through and highlighted ruins, caves, mines and other symbols that are going to be adventure sites.  I used the Ultimate Locale Creator for Swords and Wizardry to stat these up.  I set different challenge levels for each one and I noted those on another map with the name of the adventure.  Here's that map: 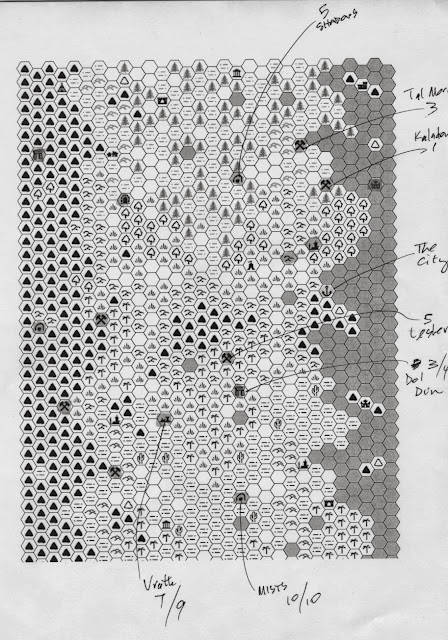 So, I have a few adventures ready and I thought up a few plot hooks to go with them.  I'm not opposed to railroading the players at the start -- they are newbies -- but I do want to be prepared if they go off in an unplanned direction (they did!!) so it's good to have some stuff in the old ringbinder...

I also printed up a copy of Dyson's Delve and I have Barrowmaze I ready too...


So, we began by rolling up their characters.  I printed out character sheets on green paper -- because that's the color my first character was rolled up on -- and I gave one to each player.  I spent a little time touring the character sheet so they knew what was what.

I explained that this game was going to be a bit different than the game at the birthday party.

"Who knows if this character will even survive?" I said.

One player wanted to be a human fighter, another a human cleric and a third a hobbit fighter.  I told them they could roll until they got "a good number" and then they could put that where they wanted.  I recommended STR or DEX for the fighters, CON and WIS for the cleric.  Then they would start at the top and roll 3d6 in order, down the page.

One character has 3 7's for attributes!  Still totally playable in Swords and Wizardry.

I'm proud of the boys because they didn't complain about having penalties in their attributes.  SOAPBOX:  Some of my fellow players in a 2nd Ed game were bitching if they didn't have multiple 18's.  Ugh.  (my character in that game doesn't have a single 18.)