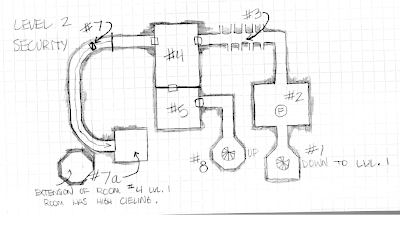 This level is guard heavy.  All evil human cultist guards.  There's also a special faction called "The Red Guards" that is elite and protects Kraalnar exclusively.


2-1 "Three guards wait here for the party.  They won't be covered by missile fire until all but one is dead.  The missile fire will come from 2-2.  These guards have low hp; 5 max.

I rolled the hp up at the time.  1d8 per guard.  Rolls over 5 became 5.  It's apparent that I tried to add a little variety to battles by putting in a contingency (missile fire after all but one are dead).  Good stuff.


2-2 "Two guards will hold off the party by firing arrows down the corridor until they can maneuver the ballista into place (rate 1/3 damage 1-10).  It is loaded.  If hard pressed, they will fall back and rely on the wall crawlers (2-3) as defense.  One guard has an arrow of giant slaying and three arrows +2.

I remember Sharky carrying that arrow of giant slaying around in his quiver for quite awhile until he needed it in the Citadel of Urk (stay tuned).   I can't remember if the guards used the arrows +2 in their own attacks.  They probably didn't; they are treasure after all.  :)


2-3 "Wall Crawlers:  These creatures are AC 0, have 8 hps, and their holes are too small to permit attacks internally.  They have a keen sense of hearing and smell.  When they hear creatures approach, they sniff the air to see if they can smell "herb pouches".  If so, the crawlers will not attack.  Otherwise, they will attack as 2 HD creatures with +2 to hit and do 1-3 pts of damage."

Although I do not note the "herb packets" on any of the antagonists in this adventure, some guards were in possession of the packets to facilitate their movement past the crawlers.  The PCs found the packets and wrote them off as some kind of "tobacco chew".  They never made the connection.

In 1993, I ran a Fantasy Hero version of this adventure at Hexacon 3.  I built a 3D dungeon board for this event.  You can see pics of the board here.  I also created the "Wall Crawlers" in 3D.

I changed the "Wall Crawlers" to be a kind of tentacle.  I created 3D walls with purple and blue dots and I put them on either side of the corridor.  I used pushpins and Sculpey to create some tentacles and when the PCs triggered the trap, I stuck the tentacles in the foam walls.  It was great!  Pins and foamcore were the perfect way to set up a "transforming" room trap.  Now you see one thing; now its different.  Here are some pics.  I would have set up the corridor, but the 3D board is in storage.  :(


2-4 "Guard Barracks:  Three more guards in chain mail await here.  They have 11 and 12 hps and wield bastard swords.  There is a total of 10 bunks.  The other three guards are on routine patrol."

I didn't have a wandering monster chart for this adventure.  I did use these three guards as an encounter when things were going a bit slow.  I think the PCs encountered them in the dungeon...