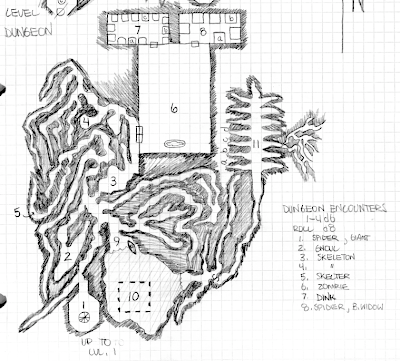 Well here we are, at the end of the adventure...


D-9 "Beach:  A ceremonial boat rests, beached, on a lake of alcohol-water.  It will hold three people at most"

D-10 "Alcohol Lake:  Characters falling from rm 2-7 fall in dotted area without damage.  This water will wash off all traces of the oil and poison on weapons.  The characters will have to shed armor and drop weapons to stay afloat."

This shows my naivety about armor.  The warriors would have drowned under anything resembling reality.  In the game, the players shucked out of their armor and sent it down to the deeps.  Later, they worked to recover it.  Ah fantasy!


D-11  "Catacombs:  (A) The first high priest lies here.  He was buried with his crown and scepter of platinum.  5000 gp value.  (B) The second high priest is not dead, but he lives a second life (I said it first!!!), waiting only to be released.  Horonis will disappear and thank the party for releasing him unto the world to wreak chaos.  (C) The third high priest is dead here.  His main treasure is a small crystal hung on an invisible chain.  This allows the casting of illusions.  It has 22 charges.

The giant rats will attack as soon as the party enters the catacombs.  12 in all.  In their lair is a gnawed magic user scroll of magic missile, knock, spider climb and invisibility."

In the catacombs the players succeeded in releasing Horonis unto the world.  I had planned on him being a grand plot hook but the players didn't bite.  Oh well.  They chose to do other things.  I figure some other heroes dealt with Horonis in their own way.

When the PCs defeated Kraalnar, it was a battle royale.  The red guards were in on the action.  Kraalnar released the skeletons (Sharky bashed one with his shield and rolled a critical.  It's impression was imprinted upon his shield).  Acid was hurled.  A person was held.

Eventually, it all came to an end when Skanderbag closed on Kraalnar, pulled out the magical gemstone in his robe pocket and pulled a "Dirty Harry" --


"Kraalnar," he said with a dramatic pause, "...GOTCHA!"  The resulting blast killed the evil priest and the gem shattered (I rolled it randomly).

In short, I explored my world as much as the players did and it was a hell of a lot of fun.

Thanks for this gem! I just did a post on Fraz, and came upon your link when I was doing a search for his picture. I just downloaded your module, look forward to reviewing it. Thanks for sharing!