Back in 1993, I ran a Fantasy Hero version of the "Evil Temple of Fraz-Urb'luu" at Hexacon 3.  I mention that here in my Q1 recaps.  My good friend JD found copies of the characters and I present them here.

If you're not familiar with Fantasy Hero, you'll likely be perplexed by the characters.  I wrote a computer program (actually a stack) in HyperCard that helped me create these characters.  FH is a super crunchy system based upon Champions, the superhero RPG.  Its very flexible, if you know how to use it, so you can create just about any character/power/spell/magic item you can imagine within the rules.  It's a point-based system that strives for balance across characters with similar point values. 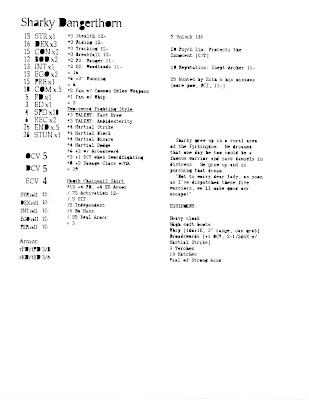 The scans were so light -- I printed the characters on my dot matrix printer (remember those?) back in the day -- that I had to do a quick select/paint in Gimp to darken them up.  Some of the hollow letters (like O and D) got filled in, but its much more readable now.
Attributes start off at 10 in FH and you pay, in points, a multiple of the cost listed next to the attribute.  Sharky is above average in everything but Comeliness -- he's just average there.
He has skills listed at the top.  You try to roll the number OR LESS on 3d6 to succeed with your skill.  KS is Knowledge skill and PS is Professional skill.
OCV, DCV and ECV are the various combat values.  You compare OCV to DCV and modify an 11 or less roll, up or down, depending upon who had the advantage in battle.
You'll see a theme as I post these characters.  Most of them have a "fighting style".  In FH, you can bundle skills together in what's called a "package deal".  This bundle then gets a small cost break.  Its a way of making characters who have similar backgrounds, like rangers, or races, like elves, well, similar.  You get a small price break in exchange for a small bit of homogeneity.
FH, like Champions, also requires that you pay for any extra points you spend with Disadvantages.  You can see those in the upper right corner.

Unluck was always one of my favorite Disads in FH or Champions.  I always defined it as "Unlucky when you're winning."  So, when things are going super well, you roll Unluck.  Get 1's and bad stuff happens.  You can take up to 3d6, with varying levels of unluck possible.

Sharky had fantastically bad luck with missile weapons in the original DnD game, so I brought that over as a Reputation.  You could also enforce certain types of roleplaying by putting Psychological Limitations in for a character.   In this case, Sharky "Protects the Innocent."

In the equipment section, you can see that Sharky has a couple of weapons that do K damage.  K damage equals "killing damage".  There are two types of damage in FH -- normal and killing.  Normal damage is more likely to knock you out; killing damage is more likely to kill you.  It's a pretty good system and it works fairly well.  There are some quirks to it, but overall I liked it a lot.

One last note, there's a temptation in FH and Champions to write up EVERYTHING as a power and assign a point cost.  (3e I'm looking at you!)

Doorstop?  That's an entangle that works only to hold doors open or closed (2 pts.)

Oven?  That's a variable killing attack that has a 1 hex area and a heat special effect (4 pts.)

I resisted that urge often when I ran FH.  You can see that Sharky has a "vial of strong acid" listed in his equipment.  How many dice of damage does that do?  Killing or normal?  Can he throw it?

Well, I guess we'll just have to figure that out in play.  :)