Day 1: Person who introduced me to D&D

Way, way back in the summer of 1981, my family had just returned to Arizona from California.  We had spent that summer in Concord, CA, holed up in a small hotel room, because my Dad was working in San Francisco.

My Dad was a union electrician, IBEW 134, and there weren't a lot of jobs to be had in the Phoenix area.  He did big industrial jobs (power plants, mines, etc.) so we frequently moved wherever the work could be found.

We had purchased a house in Mesa, AZ and had just moved in around Christmas of 1980.  Dad was working to build the Palo Verde Nuclear Generating Station and thought it would be stable.  After all, they had 12 reactors planned.

Nope.  He was laid off in the spring, so he headed to San Fran.  We waited for school to be out and then we followed him.

The summer in SF was good.  As good as it can be when you are stuck in a hotel room.  We did enjoy exploring the city on the weekends.  Alcatraz, Ripley's Believe-It-Or-Not, The Presidio, Sausalito, etc.  Oh and this cool place called "Chuck E. Cheese's Pizza!"  Lots of video games.  Asteroids was my favorite!

Anyway, it was good to be home.  I had missed my friends and my books and stuff.  Dad came back with us.  Rumor had it that Palo Verde would be starting up again, so he wanted to get his name on the books at the union hall.

Before the summer had gotten away completely, I wanted to go see my friend Brian.  Maybe hang out and swim at his house -- or maybe a sleepover!  :)

I made arrangements with him.  His parents called my parents and we got it all confirmed for a Saturday night.

When Saturday afternoon arrived, I packed up my tatty mustard-yellow duffle bag and Mom dropped me off.  They'd pick me up after breakfast on Sunday.

I headed over to Brian's, expecting we'd hang out, swim and do whatever.  Just like we always did.  He and I shared a passion for Star Trek TOS (I was Kirk, he was Spock) and computers.

I had no idea what surprise was in store for me!

That evening, Brian revealed an amazing treasure to me -- The Holmes Blue Book! 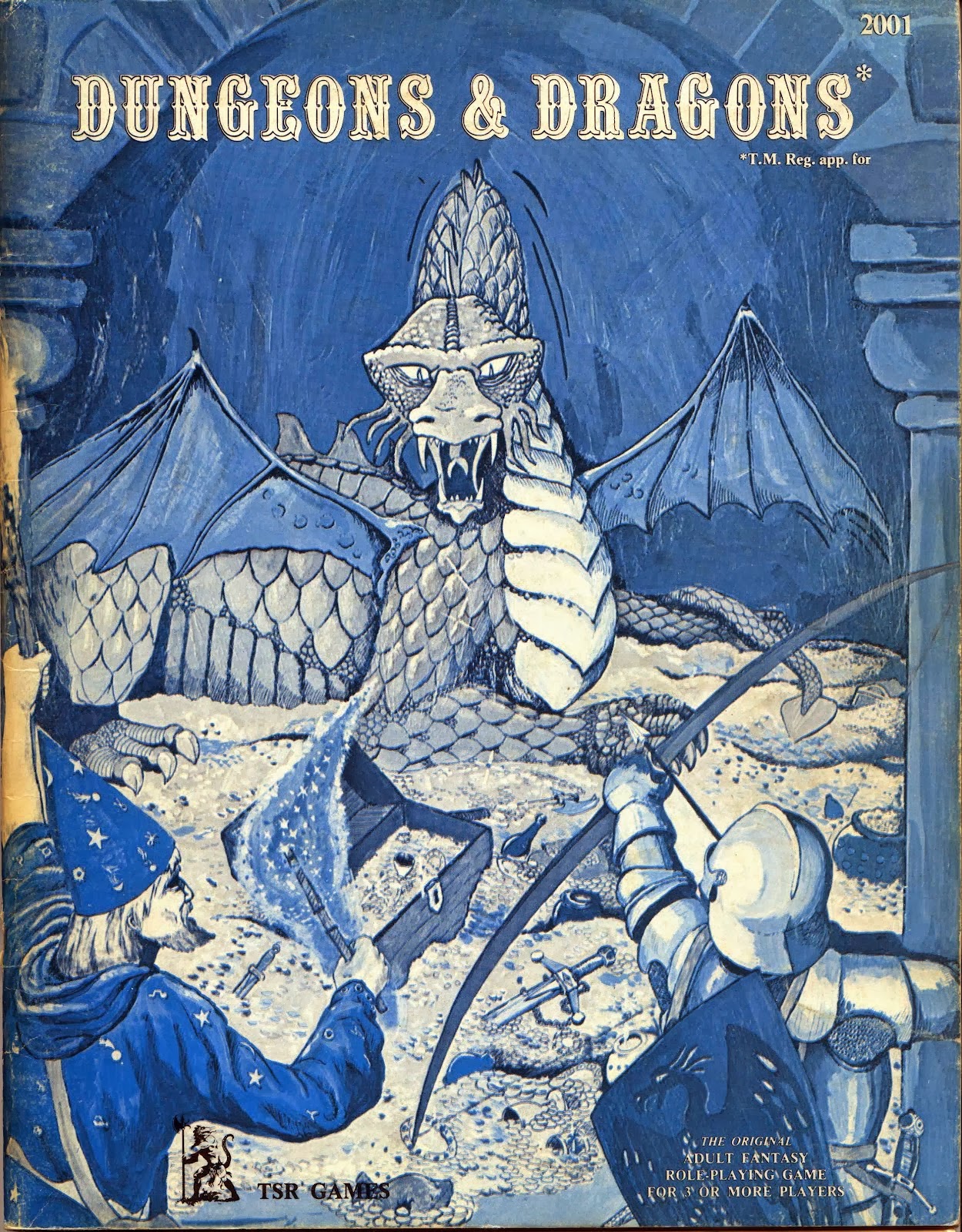 He explained that it was a game you played using "characters" while making a map on graph paper!  Amazing!

We didn't "roll up" characters, we jumped right in by choosing classes, giving them names and picking out equipment.

I had a fighter named "Berserker" (I was a big fan of the Doomfarers of Coramonde by Brian Daley,) a hobbit named "Bilbo," a wizard named "Gandalf" and an elf named "Legolas."  Not terribly creative.

We explored the "Caves of Chaos!"  I think we started with the goblins!  I remember them yelling "Bree Yark!"  How we survived that encounter, I'll never know.

Eventually we moved on to the "Shrine of Evil Chaos!"  My favorite part of B2 to this day.  :)  Brian did a great job with the descriptions and evoking the mood of the place.

It was FANTASTIC!  I was absolutely HOOKED!  I couldn't stop thinking about the game and I had to get my own books!

Eventually I did get a 1st Ed. DMG (still have it!) and a Monster Manual.

The rest, as they say, is history!

Thank you D&D and thank you Brian!

Email ThisBlogThis!Share to TwitterShare to FacebookShare to Pinterest
Labels: dnd40thanniversary

Thanks for the story.