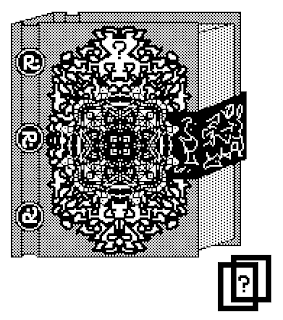 •  Oracles of Fayn may speak, read, and write any human or demi-human tongue.
•  Oracles may cast Tongues and Comprehend Languages once each per day.
•  +4 on saving throws versus scroll spells and malicious writings and glyphs.  If no save is allowed, the Oracle may make a normal save with no bonus.
•  Oracles of Fayn may read wizard spells from scrolls but there is a chance of spell failure.  For the purpose of spell failure, treat the Oracle as a wizard of half his level, rounding down.

Other Notes:  •The Oracles of Fayn are charged with keeping the knowledge of all the Whyrld.  They are eager to learn all they can about everything and most people tend to believe that the Oracles are just plain nosey.  •They always carry on their persons a pouch which contains paper, ink, and writing instruments.  They often transcribe letters for the illiterate for only a few silver coins.  •The Oracles of Fayn are responsible for the Encyclopaedia Questonia, perhaps one of the most comprehensive works of general knowledge there is.  They update it every few years with an additional volume.  •Oracles are often privy to knowledge others may never hear, but because of a vow, they may share it with none who do not belong to their order.  •Oracles always dress in a simple tan vest which bears the symbol of Fayn over the heart.  They wear white linen shirts and square cut black trousers and boots.  Their hands are always spotted with spilled ink.  •The Oracles of Fayn have an intricate network of small shrines and churches from which they gain information throughout Queston.