Originally, my 9 page DM Prep document was only 8 pages.  Recently, I had to retool my NPC names page because I was having trouble with Chris Pound's Name Generator.

Well, on a lark, I reached out to Chris and he gave me some helpful advice about linking to his page.  Suffice to say that I still have my alternate names page, but I like Chris's names A LOT better.  Here's a shot of that page: 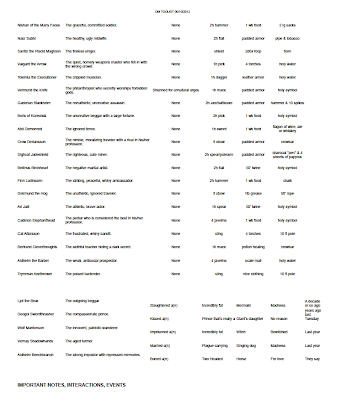 Here's a closeup of the top section:

On the left, is a hyperlinked list of Chris's names from his site.  OpenOffice refreshes this list every 30 minutes and right when I launch the file.  This gives me a random list of names each time.  I have some RANDBETWEEN cells driving some VLOOKUP functions so that I get about 30 (?) different NPCs. Chris's generator has 250 names during each iteration, so I don't come close to using them all.

I honestly don't remember where I got the data for the other columns.  I found it online or I generated it myself or something.  I have some random scripts that drive that data too.

This section has a rumor that may or may not be true.  I don't remember where I found those lists either.  :(  Over a couple of weeks, I was pulling data off the interwebs and pouring it into the spreadsheet.  Then I set up all the random functions and viola!  DM Prep page.


There are many more.   Having names and other details at your fingertips to choose from is very valuable.