Here are some pictures from last nights session.  I'll add some commentary below. 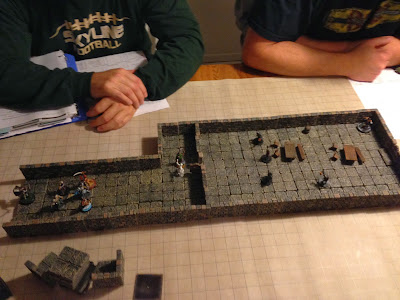 We entered Undermountain through the Yawning Portal.  Shortly thereafter, Ceril the elf archer and Odo the monk discovered a party of dangerous looking individuals lying in wait.  I believe they knew we were coming and they were waiting for us.  (Some folks in the Yawning Portal were betting heavily against us and were disappointed when we resurfaced alive) 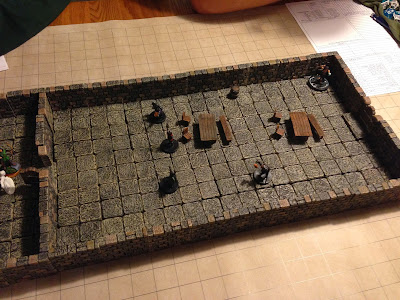 Here's the group of bad guys.  Turns out they were really bad -- spider queen tattoos on their foreheads. 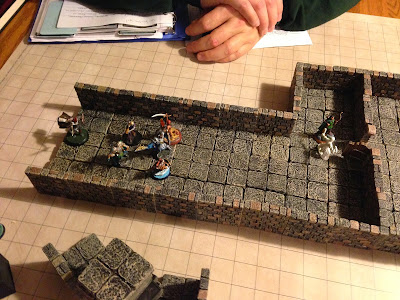 Here we are.  Ceril and Odo are over by the door.  The rest of the party is hanging back a bit. 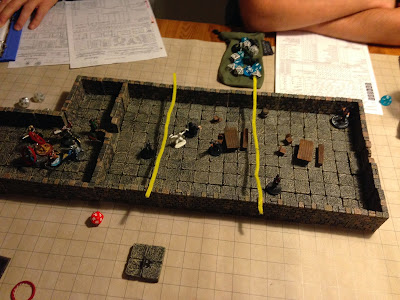 The battle begins.  Odo goes medieval on some guy called "Max."  Knocks him back into the tables and benches.  The yellow pipe cleaners represent a Stinking Cloud cast by Tharquinn our MU/C.  You can see that a large part of our party in the hall has "red rings" on them.  This represents some kind of Enthrall or other spell that held us for awhile.  Torn Sunderhelm (with the cape) had to punch Balin the Dwarf and Gorsen to get them to "shake it off."  Balin took 8 points; Gorsen 4.  Ouch! 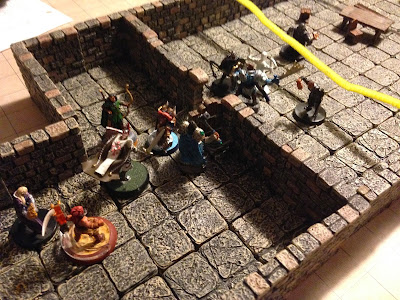 The battle at the door was intense.  Our side was largely caught on the other side of the wall.  Garron the paladin of Tyr was able to push his way into the room, opening up a lane for the dwarf.

It's not pictured, but the tide turned when Gorsen successfully cast Hold Person on the two fighters on the other side of the door.  The party finished them off quickly after that. 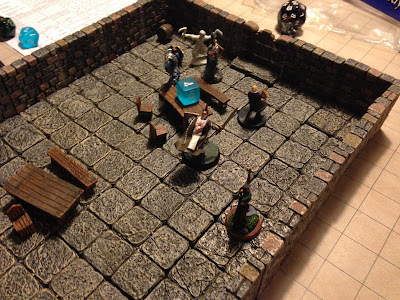 Odo ran through the Stinking Cloud to attack the wizard in the back of the room.  He got the better of Odo with Magic Missiles but Gorsen raced through the Cloud to protect his friend.  He pulped the wizard's head for 20 points with his Mace of Smiting.  :)  Dead wizard.

The evil dwarf cleric cast Hold Person on Gorsen, but Gorsen has an Armband of Free Action and wasn't affected.  :)

... I played possum though and held still, drawing the dwarf cleric closer...

Tharquinn appeared on the scene and paralyzed the dwarf cleric with his wand.

... It was at that point that Gorsen "shook off the Hold"  He popped his neck, rolled his shoulders, reached over and took the dwarf cleric's Rod of Healing and said,

"My god is stronger than your god."  He then finished the dwarf off in the name of Lathander.  :)


Side note: Gorsen is seriously getting on the bad side of the Spider Queen.  He's blessed her emmisaries as they died to send them to the bright shore of Lathander.  At one point, she manifested some kind of "shadow demon" to warn him about his behavior.  Yeah right.  :)

The party got quite a haul of gold and magic from this crew.  Unfortunately, a dwarf fighter was scared away by Fear and escaped.  We don't know where.  :( 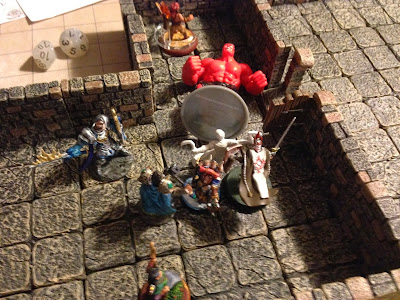 We made short work of a small group of kobolds (due to Tharquinn's Burning Hands) and then we were assaulted by a Fomorian Giant (represented by Red Hulk here).  Gorsen got a quick Command in and caused the Fomorian to drop his club and lose a round of combat.  :)

We bailed out of Undermountain.  Spent about an hour, but we were pretty much out of spells and needed healing. 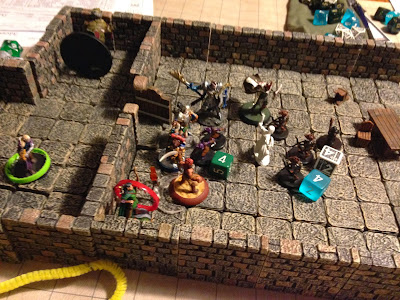 A day later, we went back in.  Discovered that someone had cast Raised Dead on the Fomorian.  Ugh.  He was tougher as an undead skeleton than alive.  Gorsen was one of the few with blunt weapons, so he guzzled his Potion of Giant Strength and waded in.  One hit for 31 points with his Mace of Striking and the skeleton was reeling.  He actually dealt it the death blow.  We then encountered another group of kobolds... 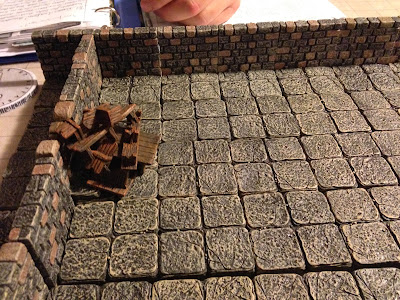 We finished the kobolds off, barricaded the door behind us with all the furniture, and moved deeper into the unknown. 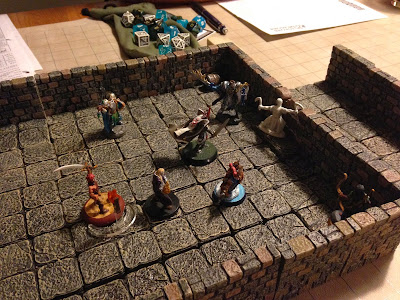 A Fire Trap caught us by surprise.  Oops.  Painful lesson. 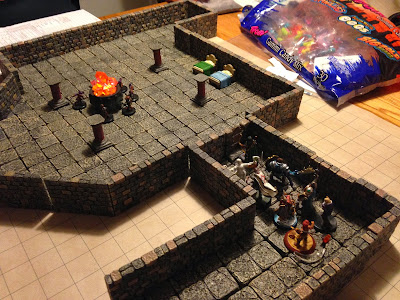 More kobolds, but they aren't expecting us.  The party charges in and makes short work.  We do manage to cause enough ruckus that other kobolds are alerted.  Odo and Gorsen block the door.  Gorsen reads Fire Trap off of a scroll on the door, but it is not very effective.  8 points.

Three kobolds get into the room, but Tharquinn casts Web down the corridor, trapping 9 kobolds.

Once the imminent thread of three kobolds is taken care of, Gorsen wades into the Webs (Armband of Free Action) and finishes the 9 kobolds off where they are stuck.  Of course, they wail like the little dogs they are and reinforcements arrive at the end of the hall... 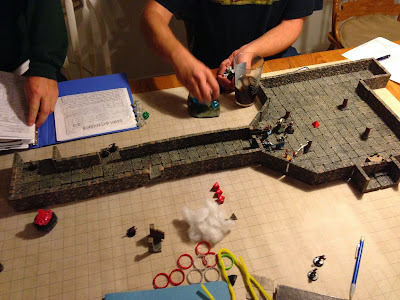 That's where we stopped for the night.

Thanks for posting. Love reading about your game sessions (and viewing the action shots!).

I think the one dude fleeing to tell the tale is probably a good thing - I dunno if your DM is using morale, but if he is maybe some enemies will start to be more likely to leg it or parley rather than fight?

@Nether Kraken -- Thank you!
@1d30 -- I agree 100% with your tattoo continuum! Spot on! The DM tells us that tomorrow night we are in for a massive battle. Apparently none of the dungeon denizens are at all put off by all the carnage. They have been emboldened. I'm sensing a TPK, but I'm OK with it. My character has already had some pretty fantastic adventures!