B2 - Keep on the Borderlands - SAVAGED! 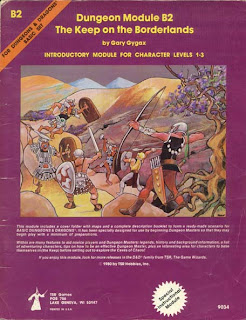 I've been playing an intermittent game of Savage Worlds with my wife, stepson and his family. They are enjoying the simplicity of the mechanics and I'm enjoying the way I run the game in a freeform manner.
The rules are crunchy enough to allow characters to feel different and to have different abilities, without being so cumbersome as to be prohibitive.
Tonight (in the absence of an actual game) I spent some time converting the "Temple of Evil Chaos" to Savage Worlds.
I busted out my stamp and I made a few stat blocks on the inside of a manilla folder. I had previously printed the Temple part of the map and I spent some time making notes about each room on the map.
I'm not going to give much details (after all, I don't want to ruin the surprise for the players) but I'm pretty happy with the work I've done.
Next task - Savaging Pathfinder and the Rise of the Runelords!