Keeping Score in the Dungeon II

In my continuing effort to "keep score" of combats (like in baseball), I present test #2!

VS. THE GRINNING SKULL ORCS 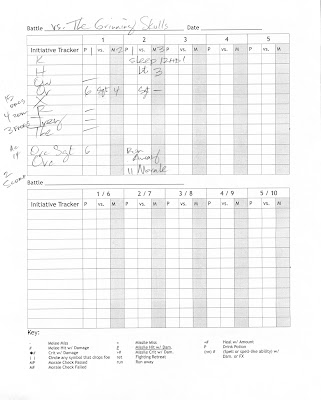 Round 1:  No one is surprised due to precautions set up by Orc Sgt. on his side of the secret door.  Orcs win initiative 2 vs. 1.   Orc leader closes with Oryx and does 4 damage (they hate dwarfs) and the two orc lieutenants rush for reinforcements.  Owyn, Rolf, Trey and Therin all miss with their melee attacks.  Oryx connects for 6 points.
Round 2:  Orcs win 3 vs 1.  Reinforcements arrive.  They charge into the room.  A lieutenant closes with Hanuman and hits for 3.  Orc Sgt. misses Oryx.  Kalen unleashes a "sleep" spell and 12 HD of orcs are slept!  Morale breaks and the remaining orcs on the other side of the door run away.
VS. SCORPIONS 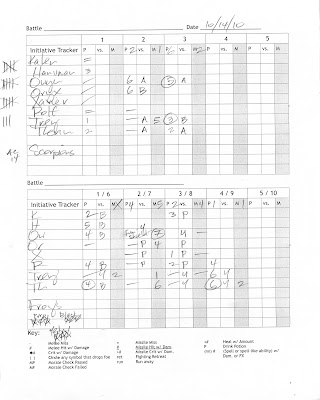 Round 1:  The party sees the scorpions in the distance and open up with missile fire.  Kalen misses and Hanuman hits one scorp for 3 pts.  Owyn, Oryx and Xavier do not act.  Rolf misses with his bow.  Trey and Therin throw javelins and hit for 3 points total.
Round 2:  The party closes to melee range and wins initiative 2 vs 1.  Owyn hits scorpion "A" for 6 pts.  Oryx hits scorp "B" for 6.  Rolf, Trey and Therin all miss.  The scorpions attack the adventurers with their claw/claw/sting routine.  Scorp A hits Trey for 5 with its claw.  It nearly sticks Owyn with its stinger...
Round 3:  The party wins init 6 vs. 2.  Therin hits Scorp A for 2 then Owyn finishes Scorp A off with 5 points damage.  Trey shifts to Scorp B and finishes it off for 3 points of damage.
VS. GIANT FROGS
Round 1:  No one is surprised, but the adventurers start off with missile fire.  They concentrate their weapons on the strange looking black frog.  It makes them nervous...  Kalen, Hanuman, Owyn, Rolf and Therin all combine to do him in before he can even attack them!  Trey closes with the yellow frog and misses.  The yellow frog hits Trey for 2 points.
Rounds 2 and 3:  (NOTE: this part of the sheet is really messed up.  I can't tell if I confused the columns or what happened...)  The adventurers took some damage this round, but no one died (I don't know what happened with the "circled 7")  The adventurers were pretty ineffectual, missing uniformly.  Owyn had his shield swallowed by the yellow frog.  Eventually the frogs were defeated.  :(
SUGGESTIONS AND IMPROVEMENTS
I need clearer delineations to keep the columns separate.  Its too easy to mis-mark a round in the wrong columns.  The grey shading helps, but I think I'll be adding some heavy lines.  The vs. middle column is important to use, but easy to forget.  I think I need a place to record morale.  The monsters DON'T need to be recorded alongside the hero names -- they go in the "vs." column.  Need to work on reading my symbol key to see if they are useful/useless.
All in all, I like the record.  I think it adds to the game.