One Bone, One Wizard

In my CotMA game, there's a recurring undead villain named Corvus the Black.  I've been using a generic "Shade Knight" to represent him -- But no longer!  Check out the guy on the left! 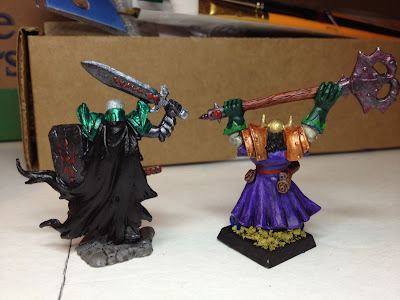 Of course, who can't use a Chaos Mage when they are running a campaign?  The guy on the right is a Games Workshop plastic from a long time ago.  He's been rattling around but now he's done.  I think he turned out nicely.  The bronze is a new paint I bought this weekend and I like it.  Did a red wash over the metallic on his staff.  His hands seem to be freakishly big, however.  :)