I love using minis (I've confessed this before) but most of the time the PCs move up on the monsters and then they just sit there bashing away until the monster is done.  :(  Perhaps its a shortcoming of my DMing or perhaps its something else.  I'd just rather have the representation of the combat be a little more dynamic.

This past Thursday, the adventurers were fighting with some skeletons in a narrow 10' doorway.  They had 10 PCs and about half of them were stuck in the other room, unable to get into the fight.

The paladin and the elf fighter both successfully struck their respective opponent skeletons for 5 pts each JUST AS THE PLAYERS WERE LAMENTING THIS FACT.

So, I said, "go ahead and push the skeletons back a square".  Presto!  Now a path into the room was available and more characters could get involved.

Now its great to handwave this kind of thing.  I'm totally comfortable with making this kind of of "off the cuff" ruling, but I think it would be more fun if it was codified (in a simple way) so the players could depend upon it.  A few weeks ago Fenway5 came up with a similar system and I posted about it here.

Here are my initial thoughts as a graphic.  I look forward to any comments you may have or if anyone actually playtests it -- let me know how it went. 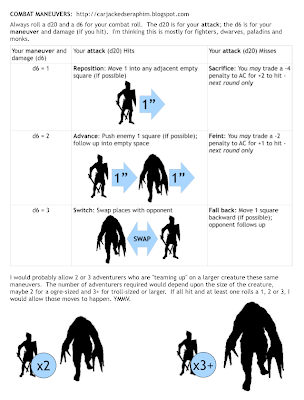 Click to embiggen!
PS: thanks to Telecanter for the silhouette of the knight -- I cheated and quickly made the other silhouette myself.  From a screenshot from a MMORPG, I think.  :)

While I think this is pretty cool, it seems a little... I don't know. It's better than the math based system that Fenway5 came up with, but...

I guess it depends on how cinematic you want your combats. I would be more inclined to let my players do things like pushes and swaps instead of causing damage. Maybe have them make an attack roll, and the opponent make a saving throw? Otherwise they get pushed or swapped?

Mind you, these are just off the cuff ideas.

@David -- good ideas. This is just my first cut at this after Fenway5's work. I was just thinking, "hm. Crappy damage = move?" We'll see how it turns out in actual play. Might be too powerful or fiddly. I like your saving throw idea...

Call me thick skulled, but what happens if you hit, roll a three and kill your adversary? Do you get to move the next guy in line? Or do you just move to the original monster's position?

And the multi-PC v. one monster scenario is a bit muddled it seems too. If all three hit and you rolled a 1, 2 and 3 then what? You get to select what you do? What if you rolled three 3's? etc.

Overall I think the idea rocks. But I guess it seems like it's just adding a bit more complexity than is needed. Why not just have a list of "maneuvers" that a fighting man (or similar combatant) can do, and throw in the rule that if you "hit" then you can accomplish the maneuver and the subsequent damage roll is halved?

Or maybe not even have an official "list" of maneuvers, but tell your players that they're just suggestions...If the PC comes up w/ something cool, that's not on the list, then adjudicate appropriately and let the dice fly.

That's my half-a-shilling's worth! Good luck.

@Gamer Dude -- Let me answer a few of these if I can... If you're a fighter in my game and you drop a foe, you do get to move one box (1") and attack again (Chop When They Drop rule -- ala Michael Curtis) If 3 PCs hit a monster and each rolled different numbers a 1 and 2 and a 3 ... I'd probably just allow the moves to happen in the order the rolls were made. I'd probably handwave it a bit and see what the board looked like... I *really like* your half damage rule! I'll have to see how that plays out and I agree; if the player comes up with something cool -- I'd roll with it! Thanks for the comment and ideas!

@Jim
Its fun to read your comments in your actual voice. It adds a distinct flavor.