Today, my grandson Matt turns 12.  Last night, he had a birthday sleepover with four of his friends and I was invited (by him) to run a Dungeons and Dragons Adventure as the main event at his party.

Needless to say, I was honored, excited and pleased.  :)

Matt has played Savage Worlds, Swords and Wizardry Whitebox and Warhammer 40k.  His friends had never played anything like D&D except on computers.  They all play a lot of Minecraft.

We started at 5:30.  Several of the boys explained to me that they didn't know if they were going to like it, but they all sat down at the table and listened intently as I explained the basics of the game.

I greatly simplified the game (you'll see that shortly) and in an effort to make all the characters unique and interesting, I used a simple "Encounter Power" mechanic that was random.  So, there was a lot about this game that was "Old School" -- player skill not character skill -- but there were some modern elements too.  It was a successful mix that I will detail further in the near future.

The bottom line is that the party ended in a TPK at 11:30pm! (after an amazing and glorious battle) and the boys exclaimed "how exciting!" "this is so cool!" "this was a lot of fun!" "I want to do this again!"

The adventure was a total success!!  I am so proud of these young men for embracing the adventure and really exploring the dungeon, figuring out the traps and NEVER shying away from the use of the 10' pole.  Seriously.  I think they enjoyed that part too! 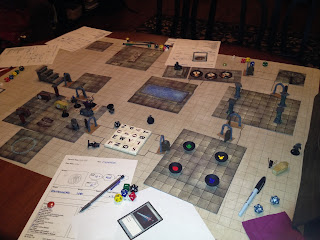 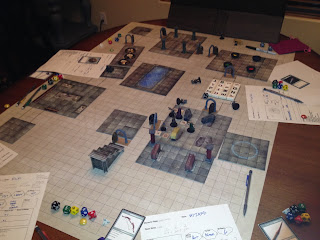 Here's a link to the adventure, the blank character sheet (front/back) and the treasure cards.  More info later -- I'm off to the family birthday party!  Happy 12th Birthday Matt!  I love you!

Wow! Sounds like an awesome good time. It sounded like you layer for about 6 hours. Brings back memories of all night sleep-overs playing RPGs.

What make are those coffins? They are sweet! Congrats on introducing something that uses pure imagination to a new generation!

@bliss -- Thanks! It was awesome!
@Art -- I bought 2 sets of 3 at Michael's Craft Store around Halloween time. Thanks for the comment!

That was a great story! Wow you make a cool Granddad!