Below I present a two-page character sheet.  This represents Sharky Dangerthorn in my heavily house-ruled 1st Ed AD&D Queston Campaign. 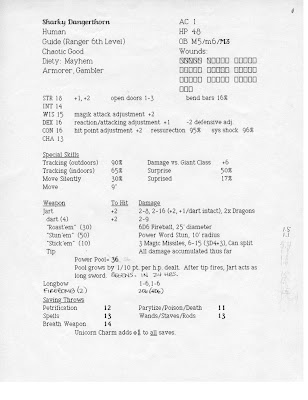 A few bits about this sheet.  OB is "Offensive Bonus".  I broke attacking into 3 categories: "M" is melee, "m" is missile combat and "M" is magical combat.  The formula for rangers was M=L-1,m=L,M=L/2 (where L is the character's level).
I created a "core mechanic" before that was a blog...  :)  All d20 rolls were "roll under target number" rolls.  "1" was a critical hit; "20" was a fumble.  (Heresy!)  You would get your target number by adding AC (descending) to your OB and any relevant bonus(es).  It was THAC0 before there was THAC0.
Looking a Sharky, he's got a melee OB of 5, a STR of 18 (+1 to hit) and a +2 sword, Jart.  If he was attacking someone in chainmail (AC 5) he'd need to roll 13 or less to hit.
"Jart" is an artifact level magical sword.  It has a power pool and the various functions drain points from the pool.  Much like Stormbringer, it sucks energy out of the monsters/creatures slain with the blade.  The Tip is a "retributive strike" and empties the pool in one big blast attack (think The Sword and the Sorcerer) 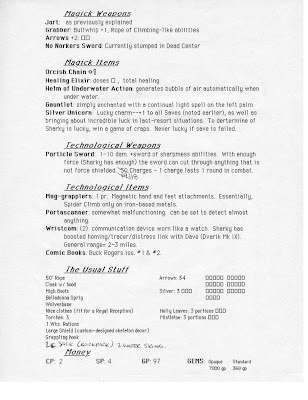 The backside of the sheet has a wide assortment of items that Sharky would use to "swashbuckle" a bit as was his adventuring style.  He also had an array of tech items that were frequently stored aboard "Dave".