You've GOT to be KIDDING ME!

Check out these pics of the WotC "Terrain Powers" for 4e: 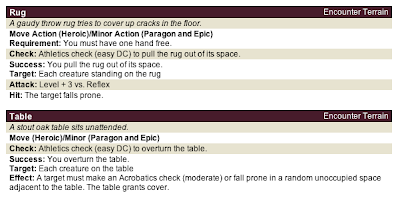 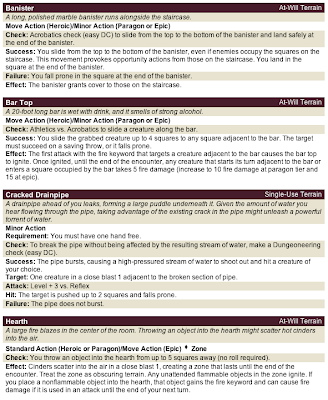 Email ThisBlogThis!Share to TwitterShare to FacebookShare to Pinterest
Labels: 4e

Yep... see, there's a reason that 4e's release sent me looking for my old gaming books.

I admit it. I had to check the link to make sure it wasn't an April 1st prank.

Yes, that definitely crosses into the cinema of the absurd.

LOL! I'm remembering when the 4e fans laughed when they heard Pathfinder was going to have rules for stairs!

Thanks for sharing this USEFUL stuff!

Please post the entries for "Clogged Toilet" and "Zany Dumbwaiter". I've had trouble eradicating all the fun from those two terrains lately.

@Everyone -- thanks for the comments!
@Endra -- I literally spit soda out my nose...

The other part that gets me is the fact that the bannister gets proportionately harder to slide down as the characters go up in level and that the alcohol on the bar burns hotter when the characters are higher level. What's up with that?

Most of all I'm just really, really confused how all banisters in every 4e game from this point on will be made of marble.

Good to know the peasants are being looked after, though!

Yes, this is needed today, because a lot of gamers just will not try these sorts of things without being given explicit rules. It's the way they were "brought up" in the hobby, so to speak. 3E was the training wheels for this, reinforcing the idea that the DM is going to screw you if you aren't protected by hard rules for what you are allowed to do.

@Jim: yes, things keep getting more difficult for 4E PCs as they level up. 4th has managed to remove the advantage of being higher level by making the difficulty of normal actions scale up with you, so there's essentially no reason to level up as the actual chance of failure remains the same. Rocks do more damage, fires hurt more, etc., too, so you will always be losing proportionately the same amount of HP no matter your level. It's one bit of 4E that I just cannot understand why it was done... it makes no sense. True balance achieved, I guess?

Ow! This hurts my brain in so many ways. None of them good. :(

I'm probably going to get shot down for this, but anyway. The terrain based powers are from the Dungeon Master's Guide. It's not something that the players would necessarily even know about. The real idea behind these things is so that when a DM is creating his encounter and filling the scene with all sorts of wonderful bits that the characters can interact with, he has a formal structure to define how those actions might play out so that he can, if he chooses, write out the rules for a character swinging on a chandelier before hand, rather than making it up on the spot. As someone who has had to make up a lot of stuff on the spot, I've frequently had PCs calling me out on inconsistency, so some sort of formalizing is not necessarily a bad thing.

These example pieces are not really for the players who are uncreative, but more for the DM's who need some inspiration in making the scenery in their encounters a little less boring. You really can only go so far with difficult ground and obstacles that provide cover. The DM would use these to construct the scene, and keep the rules handy for when some player pipes up "Can I slide down that bannister to get to the goblins quicker?" or "Hmmm.... I see there's a bunch of brandy over there. Can I smash one of those bottles and set the contents on fire?"

@Jim and anonymous: The difficulty of sliding down a bannister doesn't get harder, it essentially stays the same, regardless of level. While this does seem stupid, as getting better is the point, the simple fact is, a guy who is naturally good at sliding down bannisters is not going to get better at it just cos he's killed a lot of monsters, so this is pretty realistic. More importantly... the clumsy wizard who has never been good at sliding down bannisters should stay useless at ir, even at level 20. As for the flames dealing more damage at level 11, and 21. That's more a function of the tiers in DnD 4E. At level 1, you are a hero, which is to say that you are already more than a mere mortal. At level 11, you are a paragon, which means that even heroes look up to you. When you set fire to a bar, even the heroes are impressed by how much better you are at it than they are. At level 21, you are on your way to god-hood.

Just to close off this really long comment, I'm not taking sides in this edition war. My first set was a copy of the original red box and I've played through all of the editions and several other RPGs over the years. Every game has it's strengths and weaknesses, but in this case, I'd have to say that the terrain based powers are one of the strengths of 4th Ed, even though they look really stupid and lame out of context.

@Kev -- thanks for the post. The bannister thing makes sense the way you explain it. I'm still not buying the flaming bar, but maybe that's just me. :) Not trying to start a war -- I just think making rules for every little thing is silly. That's all. Oh, and they made me laugh... :)