In Praise of the Emergent Narrative

On June 27, I ran a session of my CotMA game.  We play about every two weeks, so there's nothing momentous about that.

What happened last night was momentous however...


Years ago, when I was younger, I used to sit and exhaustively plan adventures.  Someday I'll write a post about the campaigns that I planned, started and never finished.

These campaigns had storylines, important villains, pivotal events, epic locales and a definite endgame. I KNEW where they were going BEFORE I ever started.  I tweaked, manipulated, coerced, cajoled and railroaded my players along toward this eventual end.

Now, I want you to know that NOBODY COMPLAINED.  I think it's fair to say that my players thoroughly enjoyed the stories that were unfolding to them.

I don't think anyone believed they had "death immunity" and I don't think people believed that they had no player agency.  In fact, a lot of their agency frequently worked AGAINST MY STORYLINE, but the show must go on.  :)  I've had to dream up dozens of plot twists and turns to keep the train on the tracks.  One time, I had to miraculously send the entire party BACK IN TIME about 100 years just so the timeline of the adventure wouldn't get screwed up...

Oh, and I fudged A LOT OF DICE.  One thing I learned early on was, it's a lot easier to nudge and fudge a little bit here and there as  a way of preventing the whole thing from coming off the rails.  When things get too far afield, that's when the whole deus ex machina problem appears and everyone gets whisked back in time...

For a couple of years now, I've been running my games a lot differently.  I have embraced randomness and the emergent narrative.  I don't fudge dice; I respect their oracular nature.  I don't plan too much ahead.  I think of scenes and possible outcomes and I have some maps handy, but there's no railroad just a broad stretch of sand...

I thought I knew the power of this approach, but last night cemented it for me.


Last night proved that not only is that approach a waste of time, it's not nearly as exciting as just setting up the world and letting it "happen."


So, here's what happened...  (if you are playing CotMA, spoilers follow)


The adventurers decided to continue their exploration of the 7th level by following the "Bone Road" and plundering crypts along the way.

Often, Sir Owyn, the paladin, is along on these explorations so they are focused more on rooting out and defeating evil rather than pure plunder, but last night was different.  Sir Owyn was away on Sinakad business.

The party arrived on Level 7 and before they could explore a single tomb, they were once again confronted by an evil clown/golem.  The golem was entangled by grasping shadows by Biata the Shadowmage and the two dwarves, Oryx and Grunbar along with the fighter Kesk, were able to bring it down.  This is the second clown they've encountered and they are pretty tough customers...

The first tomb they entered was marked with the name "Malvaunt."  They entered to find ornate statues of ogres and trolls as well as a strange syrupy "darkness" that seemed dangerous to enter.  Biata parted it with a shadow passwall and the party moved deeper in.

They were stopped by a door with a talking demonic head.  It challenged them with a riddle.  Kalen, the wizard, called upon Bachontoi, the God of Red Wisdom, and asked for the answer.  (Kalen and Bachontoi have an interesting relationship.  Kalen doesn't believe he is actually a god and Bachontoi has tasked Kalen with retrieving an object for him.  As a result, Kalen has a limited hotline to Bachontoi.)

When the attitude table for Bachontoi was consulted, he was in a "whimsical" mood and he decided to appear and banter with the party. 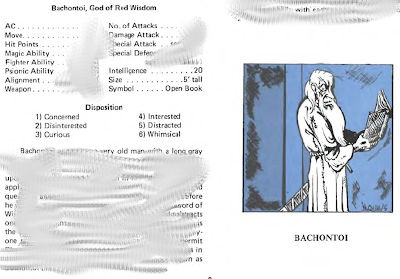 Eventually he told them the answer to the riddle and he moved on.  But before he did, he offered to give a "boon" to anyone who could match him at "rock, paper, scissors".  Everyone joined in and Grunbar and Vera succeeded at matching his throw of "scissors".  This will be important later.


The party defeated Malvaunt in his tomb and the proceeded down the Bone Road.

They encountered a trapped tomb, which the dwarves cleverly defeated, and then they found a tomb with an entrance shaped like a clown's face.

Some of the party were instantly creeped out (with good reason...)

The party took out their sledge hammers and bashed the bricks sealing the clown tomb down.  The sound of a child's laughter was heard and shivers continued to creep up spines...

The adventurers were presented with a maze of mirrors.  Each reflection, save one, presented a "clownified" reflection of the adventurers.  The party began to smash mirrors, to no effect, until they smashed the mirror with their "normal" reflections.

These reflections proved to be mirror duplicates of the party.  They weren't difficult to defeat, but now the party was decidedly on edge.

They continued through the mirror maze and emerged to find a playroom filled with 10 undead children.  Six of them were ghostly in appearance and four were skeletal.  The "children" squealed with joy at the sight of new playmates and eagerly suggested that they all play tag.

Grunbar quickly suggested a different game -- hide and seek -- which the "children" agreed to excitedly.  The spirit children vanished and the four skeletal children hid in the corners among their tattered and worn toys.  Biata began counting (slowly) from 100...  99...  98...

The party moved carefully across the room, but not before Kalen cast Protection from Evil 10' radius.

They heard the rhythmic creak of a rocking chair through the door.

The party decided to "nuke" the room.  The door would be opened and multiple damage spells -- fireball, shadow fireball, lightning -- would be unleashed and then the door pulled tightly shut.  The plan was set and the action ensued...

They opened the door to see a kindly old nursemaid sitting in a rocker with a creepy "bundle."

They nuked her.  She saved three times for no damage.

Here's where it got really interesting...


The creature that was the nursemaid shrugged off the damage and proceeded to call for reinforcements.


Well, now, which one?  We're on a level filled with undead.  The area right outside this crypt is called the Bone Road, this "gal" is a nursemaid to a bunch of undead children.  Hmm.  Not too difficult to figure out who answers the call... 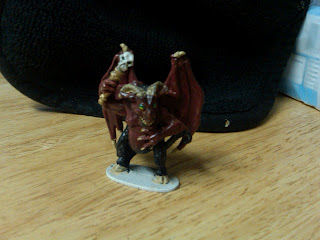 Upon the arrival of the Demon Prince of the Undead, I told the party that they felt a terrible rush of evil into the world.  It was as if all hope had drained from their lives and nothing ever good would ever happen again.  Dread and despair and darkness seemed to lurk behind the door...

Some in the party wanted to run immediately, but others wanted to open the door to take a look...  They looked...

The party was already huddled around Kalen and as a result was protected by the Protection from Evil.  They ran!

They were fast, but not as fast as the demon prince.  They fled down the Bone Road and into the dungeon passageways.  Along the way, Orcus summoned some Vrocks to back him up.  He followed closely menacing the group.

They hit upon a plan to flee to the elevator on the level.  Once inside, they could lock the door and flee to the second level, leaving Orcus behind on the seventh.  One problem, the elevator is inside an evil temple and that temple is protected by an aura of Protection from Good.  Grunbar and Vera can't enter the temple!

Upon entering the narrow corridors, the party would slow down, allowing Vera and Grunbar to flee away from the party on the far side, away from Orcus.  They would break left, heading up the stairs to level six and through the teleport passage back to level four.  The rest of the party would head for the elevator.

A couple of things could spoil their plan...

Would the elevator be there?

What would the Vrocks do?

Bearing all this in mind, and remembering that Bachontoi had granted a boon to Grunbar and Vera alone (!) I rolled some dice.

The Vrocks would be pursuing Grunbar and Vera.  They had two chances to catch the escaping dwarf and elf, modified for the Boon of Bachontoi (rattle of dice)  No.  They made it to the teleporter and were now on the fourth level.

Was the elevator there?  (rattle of dice)  Yes.  The door was opened and then closed in the face of a roaring demon lord.  The rest of the party was on to level two.

I couldn't have planned it better myself!


So now the party has loosed a powerful demon lord within the Castle of the Mad Archmage.  What will they do now?  How does this change the game?  What is the demon lord up to?  What about the Mad Archmage?  Or Bachontoi?  Or...  well, you get the idea.  The game just got a lot more interesting and I didn't have to plan for hours and hours...

Cool deal. They unleashed doom upon the world! They've got to send ol' Orcus back.

Wow... really sounds like you're having fun with CotMA. It's great to see how you're adapting it to your own campaign's needs!

That sounded like an awesome session. I was always intrigued by the pre-painted Orcus mini that WotC produce,d but that thing now goes for $120 on eBay. Ouch.

@Telecanter -- Yes. Marcus/Biata REALLY shined during this session. It was awesome. They've got their work cut out for them now...
@Joseph -- Thanks again for such an awesome adventure. My group is really enjoying it and I enjoy improvising within it.
@Christian -- I think that mini is pretty cool too, but there is something equally menacing about a smaller mini being just as deadly... :)

This is what happens when you explore an evil temple, minus a paladin, and instead follow the lead of Kalen the Unethical.

Sorry I missed it.