So, last Wednesday, I had four players.  Ten players are participating in my game, with six or seven being typical attendance for the night.

With four players, there's a lot more experience to go around if you hit the mother lode or manage to defeat a bunch of monsters.

To be honest, the players did neither, but I do think the session was memorable nonetheless. 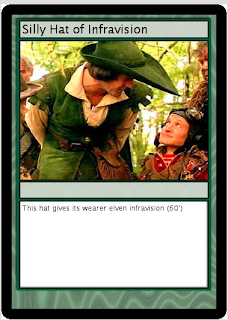 The players began by discussing where they'd like to go in CotMA.  They settled on level 5.  A magic level, filled with slimes and other aberrations, that they hadn't fully explored.

They teleported down to the level and while approaching a secret door, Oryx discovered a faint, blinking multi-colored light emanating from the room beyond.

"Floating, glowing orb," they reasoned -- and they were right.  These things can be dangerous and they are quite fragile.

Oryx suggested that Grunbar should go out there and "blow on it" to move it down the hallway.  Grunbar considered the suggestion for a moment and then decided to execute that plan.

Mostly he managed to move the glowing ball backward and forward within the room, but eventually it moved out into the hall...

...where it attracted the attention of a group of Owlbears. 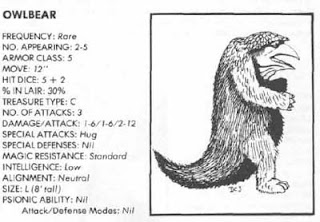 Grunbar and the rest of the party fell back into the room and waited for the owlbears to approach.  Approach they did, a bit mesmerized by the glowing sphere.

Grunbar deftly threw an iron spike at the sphere from a place of protection around the corner.  The sphere detonated blowing one owlbear into a haze and severely damaging the other two.  The owlbears didn't put up much of a fight after that.

The cautiously moved out into the hallway and moved toward the strange Moai head that dominates the large corridor.  They were moving under cover of darkness because everyone had infravision!

They crept backward down the corridor and set up a trap.  Using Oryx as bait (and his dwarven harness as a tow line) they hoped to trick the owlbears into falling down a covered pit.


Months ago, they had discovered the pit when a few clumsy gnolls failed their morale check and fell into the pit, sealing their doom...

Grunbar (STR 18) and Collen (STR 19) grabbed ahold of Oryx's "leash" and the dwarf started making noises of his own.  The six owlbears charged ahead and the party reeled Oryx in.

Two owlbears crashed onto the covered pit and fell in.  The other four swarmed around to the left of the pit, where Collen, Morgrim and Grunbar closed to melee.  They dealt with the threat in quick fashion.


I'm sure I've forgotten some awesome stuff, but it was a great session and I've been over 90 days NOT posting about it.  :(

You don't often see a shout out for the Council of Tramway Museums of Australasia. Proper!