It's been a month since we concluded this adventure.  I should have posted a recap right away; but I didn't. What is written below is my thoughts and memories of a great adventure.  I know the players enjoyed it and it was a hoot to run.

Of course, I didn't use 4e, so I can't speak to how the adventure would play in that system.  :)

When last we left our heroes, they had discovered to small chambers at the bottom of ladders secreted within sarcophagi -- 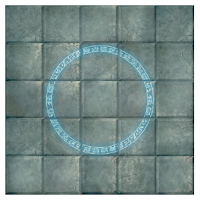 THE MAGIC CIRCLE ROOM:  This room was apparently empty except for the magic circle.
And another led here: 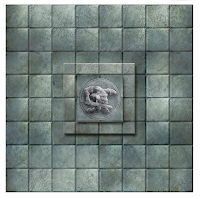 THE STATUE ROOM:  This room had four terrible monsters in it: a fire elemental, a demon, a slime beast and a giant two-headed worm.
The adventurers descended into the MAGIC CIRCLE ROOM and couldn't find a way in.  It was obvious that one of the keys they needed rested in the center of the circle.  Eventually, when searching, the dwarf discovered six different blocks built into the wall that didn't look natural.  Inside these blocks were potions of phasing.  They used one potion to enter and exit the circle.  The key didn't react to the phasing -- it was always solid to the touch.
The adventurers then decided to descend to face the four monsters in the STATUE ROOM.  I made the monsters up on the fly.  The PCs used several of the potions of phasing to increase their AC by 8.  This was vital because the monsters were TOUGH.  I found four minis (some DnD and some MageKnight) that fit the bill and pulled some stats together.
Two monsters got 2 attacks each.  One had poison.  One had acidic slime.  One burned.  Several got bonuses to hit and damage.  :)  In the words of Zach S, "I don't hate you, but I represent people monsters who do..."
The potions only lasted 6 rounds, so I used a die to "countdown" dramatically to the point where the PCs were going to get demolished...
The wizard cast sleep on the giant worm (it was the only thing it would work on and he rolled a bunch of HD)... down it went.  Of course, you can't just KILL something that big with a sword when its asleep.  You can do hella damage to it, but then it will wake up....
Collen had found a frostblade in one of the other sarcophagi, so he went toe-to-toe with the elemental.  Owyn went after the slime and demon.  Kalen went after the worm...
I don't remember much about the combat, but I do know that I needed a 20 to hit the PCs for the first six rounds.   I rolled 5 20's against Owyn alone!  His shield was destroyed by the slime creature's acid.  He got pretty well beat up before the demon went down.
Collen played it conservative right up until the phasing potion wore off.  Then he decided to roll the d30 as his attack roll.  The PCs managed to win initiative and good thing too.  Collen rolled 22 (a crit threat) then 23 on the d30.  Getting maximum damage 15 points --- EXACTLY the amount of damage the fire elemental had left.  Whew!
The PC's now had two keys of four that they needed.
They used some healing, bandaged some wounds, and headed here... 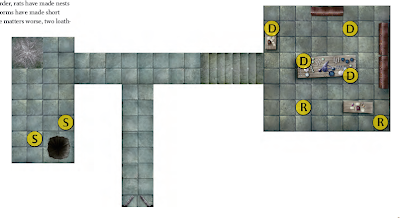 RATS AND SPIDERS
To the left  they fought many rodents of unusual size and eventually, there in the T intersection, a giant spider pounced upon Hanuman causing the donkey to run UP the stairs toward the lab on the right.  Bummer, that's where the other spiders are...
Xavier acted boldly and sprung into action.  He chased after poor Roberto (using a little umph from his feline leg to get over the crowd in the hall).  He found Roberto in the lab being feasted upon by two giant spiders.
Eventually the spiders and rats were defeated.  Roberto was nursed back to health by Cack (who has a knack with horses, etc.) and the third key (and some other interesting items) were recovered.
That led the party here:

THE ROOM OF STATUES
The far room was filled with (surely) animated statues.  Just standing.  Waiting.
The players spent a lot of time discussing how they could get to the key (held by that large winged statue) without having to fight ALL the animated statues.
Eventually, they came upon the plan that Hanuman would use his monk-y abilities to leap from statue head to statue head, trying to get to the back with a minimum of statue activations.  This plan was based on a lot of (correct) assumptions.
Hanuman made a number of successful rolls, rolling equal to or under his DEX, but just as he closed in on the big statue -- 20.  He missed his target.
During the leaping, each statue that he touched activated and moved toward the door.  The PCs destroyed them in quick succession.
I don't remember how the battle concluded, but I do remember that Hanuman got the last key.  He leapt from the tall statue in the far part of the room.  Several statues that had animated followed him.  The party used a rigged rope setup to trip the statues as they entered the 4x4 antechamber.   It was a very cool and very satisfying defeat of this room.
Animated statues are very poor at standing up...
That led the party here, to the concluding chamber... 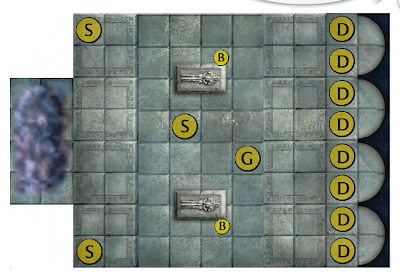 FINAL CHAMBER
The party assembled the keys into a metallic square.  The square, it was discovered, could be used to open a passage through the purple mist.  They entered the room and did battle with the creatures within.
The burning skeletons (S) were turned (!) and cowered in the back of the room.  The other skeletons (D) joined the fight.  The ghost of Anarus Kalton (G) had six different magical powers and I rolled them randomly each round.
There was a great give and take in the battle.  Several of the PCs ended up on the DD&DD table.  Each of the ghost's powers were unleashed once.  Its final "Blast of Chaos" corrupted the wizard, turning a large portion of his flesh to a twisting, writhing mass.  Elin, the warrior maiden, was hit in the face.  Her features melted into a featureless mask and her eyes were destroyed.
Just as things looked extremely dire, the party rallied and defeated the evil ghost!
Now, back to town to see Uuthak and his Regen-O-Pod!
If I forgot anything critical, I invite my players to add some info in the comments!  Now back to CotMA!