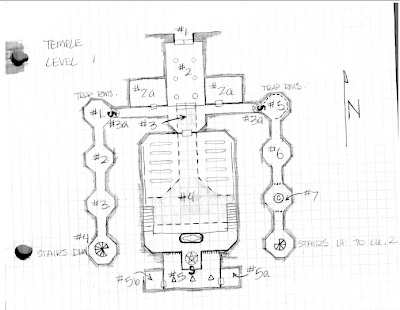 The Trap Rooms:
I actually broke out the key for this level into two parts.  1-1 to 1-5b were all "Temple Level", now we have "The Trap Rooms".
I'll label those TR-1, etc.
I remember when I was creating this dungeon, I was thinking, "How do the bad guys get past all these traps and illusions?"  I think I succeeded in making each trap 'realistic', in that if you know that it's there, or you snoop around, you can figure a way around them.

TR-2 "This room has walls which are very sticky and cause anything they touch to stick to them.  (really, I don't think the walls are in the habit of touching things; I think that things come into contact with the walls...)  This bond can be broken by strength, but the character will take 1-6 points of damage from his skin ripping off.  The bond can also be dissolved by alcohol a strong solvent (?).  There is a +1 longsword which hums in the presence of orcs stuck to the southeast wall.  Anyone trying to take the sword has a 1-3 on 6 chance of touching the wall and becoming stuck.  If the sword is forced off the wall it will break.

I seem to remember that the NPC, Brash Blunderbuss, managed to get the sword off the wall.  I don't remember if I did that to showcase the sticky walls or if the other players somehow suggested that Brash go after the sword.

the light beams in TR-3

TR-3 "There are beams of light alternating like steps (see above) in the center of the room.  They can be considered to be two things: 1- LIGHT STEPS: they can be walked across if desired.  This will accrue no damage or harm.  2- TRIP BEAMS for a trap: if this is thought of or inferred then the person who breaks the beam will take 1-2 pts of damage per beam.

I'm actually quite proud of the following trap.  I enjoyed DMing it back in the day.


TR-4 "The Ascending/Descending Stair:  This staircase is set up on a counter weight system that allows the priests to raise and lower the steps to the dungeon level with little effort.  The steps are currently down.  The stairs counter-weight has gone slightly bad, in that if you walk along the outside along the railing, the stairs slowly crank upwards.  By the time the party has reached the bottom of the stairs in this manner, it will be a 20' drop to the floor.  This defect has been reinforced by an illusion that the stairs are still down.  The twisting and spiral nature make this ascent of the stairs almost impossible to detect (a 5% chance for someone who thinks something's wrong).  This effect is easily avoided if the characters walk toward the inside of the stairs.  The ceiling is 40' high.  The fall does 2-12 pts. of damage.

I remember the lead character taking a tumble at the end.  "That last step is a doozy!"  Of course the other problem is that you are now 20' below the bottom stair in a dark dungeon.  Good stuff.