Well, I guess I spelled "Doorknob" in a more dwarfish-kinda-way.  :) 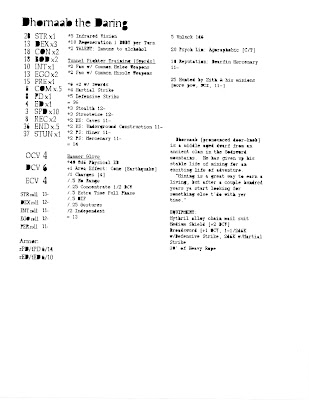 Dhornaab is also incredibly tough, as you can see from his STR, CON and BOD characteristics.  He's got high defenses and a shield that bolsters his DCV.
As I mentioned before, I ran this scenario at Hexacon 3, so I tried to make each of the characters a little different and a little special in their own right.
Dhornaab has a magical "Hammer Glove" (something he never had in DnD) that allows him to punch the ground and make a cone shaped earthquake for 8d6 normal damage.  Great way to soften up the minions...
I like the fact that I gave him the Talent: Immune to Alcohol.  In the old DnD campaign, Dhornaab was always drinking in the tavern and never got drunk.
I also didn't "stat out" his "Mythril alloy chain mail" -- I just assigned him 6 pts of defense from it.

I dig that Hammer Glove. I think there's a Daily power in 4e that is similar. One of the PCs in my Spelljammer game wrecked fools with it. Good stuff!