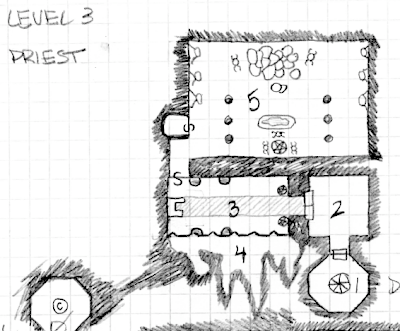 3-1 "The door in this room can only be opened normally if the high priest's amulet is pressed into a depression in the middle of the door.  One red guard waits here."

This is one of those situations where you need a really strong character in the party... wait!  Brash is strong... BLAM!  Down goes the door.  Of course, everyone knows you're here now...


3-2 "The Anteroom:  This room has two couches of red velvet with gold trimmings.  The trimmings are worth about 800 gp for gold value alone, but if the couches can be transported out intact, they are worth 1200 gp each.  The room is lit by braziers and incense is in the air."

I like this room because there's A LOT of treasure here, but it isn't in convenient coin-shaped portions.


3-3 "The Hall:  The shaded area is red carpet.  The statues beside the door are of demons and are made of silver.  The semi-circles are pillars with bas-reliefs of demon faces, skulls, etc.  The south wall is made of an elaborate illusion/force wall that holds back the skeletons on the other side.  This wall is dropped by pressing the button on the crystal prod when it is in its socket on the throne.  The prod is owned by the priest."

In retrospect, I don't really think that Fraz-Urb'luu would have actual undead in his ranks.  That's more of an Orcus thing.  Some kind of spectral horror would be more his speed.

The round objects to the north, center are pillows.  They are flanked by two braziers which are magic and cannot be moved.  The dark dots are pillars.  The statue is of Fraz-Urb'luu and is surrounded by three magical braziers.  The sacrificial block is magical in that anything placed upon it is teleported to a similar block in D-6.  Chained to the wall are six scantily clad females of the voluptuous type. (Good gawd! Was I a teenage boy or what!?!) One of them is the princess of Fyrkeep.  If returned to her father will bring a reward of 10,000 gp to each rescuer.  She is a very beautiful redhead and is a 1st level fighter with 9 hp.  She is cultured whereas the others are just beautiful slaves.

This was the start of something really big.  Princess Fyrissa became the femme fatale for several adventures.  She was wooed by Sharky and Skanderbag.  Eventually, she married Skanderbag and they had a daughter, Embril.  Her kidnap and rescue were the focus of the campaign and led to a direct conflict with another demon lord, Graz'zt.

The treasure amounts for this adventure are HUGE!  If you rescue Fyrissa, you would become extremely wealthy.  A little bit of Monty Haulism was going on.  :)  I think the magic items were distributed well though.

On to the Dungeon!

This is such a great series!

@Christian -- glad you like it. I'll do the Dungeon levels this week and then I'll post the whole thing as a PDF. :)

Hey Jim, would love to see the whole thing, any plans to make the pdf available again?

@Dean -- the Google Sites page disappeared... I've fixed the link at the right using Google Drive. Enjoy. Let me know what you think. :)