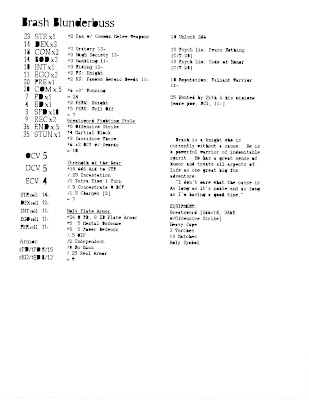 Brash is HUGELY STRONG.  In fact, I had to pay DOUBLE points to raise his STR from 20 to 23.  20 is the max for heroic characters in FH.  His CON, BOD, PRE and COM are very high too.  He's quite a tough, imposing, handsome physical specimen.  :)
In Queston, knights have a totem animal and Brash's totem is the bear.  He can invoke a special power to roll 6d6 and add those points directly to his STR score.  On average, that would raise his STR about 21 points!  At STR 44, Brash would roll 8-1/2 normal dice of damage when he punches, his greatsword would jump to 4-1/2dK, and he would be capable of lifting (Ha! he's actually OFF THE CHART in Fantasy Hero -- switching to Champions...) 6400 kg!  Wow!
Brash is also the wall that walks like a man.  His defenses are practically DOUBLE the defenses of Sharky or Skanderbag.  He can take a ton of punishment before going down.
Of course, with Psych Lims of "Fears Nothing" and "Code of Honor" he's gonna need all the help he can get...