Here's the FH version of our heroic wizard, Skanderbag the Unexpected. 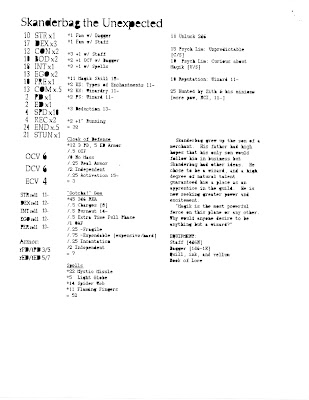 Skanderbag is exceptional in DEX and INT.  Good attributes for a wizard.  He also has an extra inch of running.  The best 2 pts. you can spend in FH.  You see, you typically make a "half move" in FH and then you attack.  Your normal move is 6" by default.  Adding 1" to your "full move" makes it 7" and your "half move" rounds up to 4".  A very handy thing to have.
In FH, Skanderbag is a little tougher to take down than his DnD alter ego.  He has a "Cloak of Defense" which gives him a significant amount of armor.  In fact, his defenses vs. energy attacks are actually higher than Sharky's!
You can see that Skanderbag has a 3d6 RKA (ranged killing attack) in the form of the Gotcha! gem.  It has limited charges AND it has the chance to "burnout" after its used.
He also has four spells.  Its pretty obvious what they do.  I'll have to look and see if I have them written up somewhere for a future post.