So Anonymous runs out of the hall and into the larger room, screaming that the ogre is trying to get him.

The ogre charges into the room and the fighters attack.  Most miss, but in two successive rounds Brena deals 12 points of damage to the ogre.  This is enough to take him out and the party is duly impressed.

Cheers for Brena the "Bad Axe" all around the table!  (dad coined that phrase and I don't know if the grandkids catch the double entendre...)

They gather the coins he has in his belt pouch and they move on toward "the forbidden doors."  About 320 gp.

The goblin told the adventurers that the doors were sealed shut.  "No go in," he said.  Hoss had a theory that perhaps the ogre lived behind the doors, but both doors were solidly blocked.  The doors were boarded up, but that did not serve as any kind of deterrent at all.  Hammers and prybars were employed to gain entry.

The party tore the boards off and forced the door.  They found themselves in a 20x20 room with an old font filled with a bit of stagnant water.  At the request of Anonymous, the goblin tried the water and said it was okay to drink, but not really very good.

Anonymous got out his 10' pole and tested the walls, floor and ceiling for traps.  Eventually, they came upon four stony graves/tombs in the floor of an adjacent room.  With a single poke, Anonymous determined that the rocks, dirt and stones were quite loose around the tombs...

Hoss urged caution, but Anonymous kept poking at the stony graves until four zombies burst out of the ground! 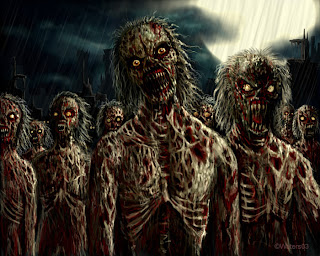 Anonymous activated his shield ring and his AC jumped to 18.  The party waded in.

Within two rounds, the zombies had rolled exceptionally well and the party had rolled very poorly.

Brena (the hero of the ogre encounter), Pelton (the brave) and Hoss (the fighter/leader) were all dead on the floor.  It took the efforts of Tiny, Anonymous and Drago (with his sling) to defeat the zombies.

In the end -- 3 dead out of 7 -- two hirelings and another PC.  The adventurers needed to call it a day and return to Verbosh.

In the end, they found some gold, silver and a shiny +1 dagger. 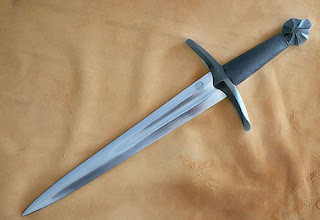 Back in Verbosh, the adventurers returned the dead to their families (Brena and Pelton) and they put out the word that they needed a few new hirelings.  (I love the Meatshields resource so I printed another page)  They settled on three new companions and also sought out Hoss's smaller brother, "Ross" who is more of an archer than swordsman (7 STR and 15 DEX).

SIDENOTE: so far, both PCs that have died (fair and square) have belonged to Brian my stepson (father of the two grandkids.)  He has taken both deaths with grace and good spirits.  I'm thrilled, because eventually one of the grandkids is going to lose a character.  Brian (as I expected) has been a great example to his kids.  If I had to guess, its gonna be Matt if he keeps being reckless with ogres and he keeps poking at obvious traps with his 10' pole...  :)

SIDENOTE 2: on his way out on Thurs nite, Matt said, "if my wizard dies, can I make up a twin brother for him?"  "Sure," I said.  "I'll name him Hip Hop Anonymous."  -- a funny phrase that Brian and I keep using during the game...