I guess this is a philosophical post that asks a question --


Do you allow silly or absurd character names in your games?

Why do I ask?  Well, I think if your campaign has a particular theme or style, nothing breaks the theme or style like a silly name.


The kingdom is in peril.  Anglarth the Black Dragon is at the gates.  The tome of Arl-an-Uuthark must be opened.  The sword of Tor Azul must be reforged.

See what I mean?

In the Rythlondar Chronicle, it seems like the PCs didn't even have names (caveat - I haven't read the whole thing yet), but the NPCs do.  Of course, this is very early in our hobby's history.

I actually think this might be preferable to silly names.

I know that when I played Wizardry, I *tried* to come up with a clever, somewhat silly name.  Of course, you are playing against the computer in this case.  Basically, you use a silly name to amuse yourself.  One of friends came up with one of the all-time best Wizardry character names (in my opinion)

In my games, I like the PCs to (eventually) have realistic sounding names.  I don't rush the process.  For a session or two, players might refer to their characters by their class.

In my Queston Campaign, I used HyperCard (years ago) to create a stack that randomly generated names for each fantasy race in play.

First names were made from an assortment of sounds (you might loosely call them phonemes) that were randomized and assembled by the program.

Last names were made from two-word combinations (in most instances)

Since these were computer generated, you could still get some silly results.  I made up for this by generating hundreds of names and then allowing the player to mix and match.  It seemed to work pretty well. 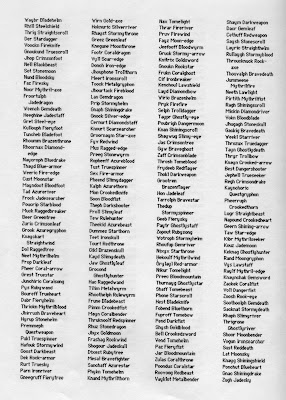 Now, of course, with the internet you can find many random generators out there.  My favorites are here.  Special nod to this name generator which I like a great deal.

So, do you allow silly names at your table?

Yeah, I allow silly names. I don't want to block player autonomy or creativity, especially at such an embryonic stage of play. I'd rather endure Turdburglar McGee in the campaign than give the impression I want to run the PC for the player. Still, I keep a name generator handy for those who want to use it.

I agree with Jeff. Name suggestions are a great way to set expectations. If a player wants to go off the reservation, you've got two choices (after suggesting other, more setting-appropriate names): let them play with the silly-named character, or don't invite them back.

I too allow silly names, but have found name generators to be handy.
Oh by the way, I just ordered Wilderness Alphabet! : 0

@Jeff, Aaron, Bill -- Thanks for your posts (and Bill for your purchase!)

I have a big list of CAPTCHAs that I like, sometimes edited slightly for pronunciation, and I print out a new sheet when I collect enough.

I also have a shorter list of cool names I come up with or find, but I usually reserve those for NPCs and my characters.

I hand over the CAPTCHA list to players thinking of a name, but they can pick anything they want.