On Thursday night, my grandkids came over again with their dad and they once again made a foray into Dyson's Delve, or as they know it, the Church of the Blue Stones.

They gathered their hirelings and purchased some much needed supplies -- and headed back into the unknown.

I asked Matt to recap where they had been and he did a pretty good job.  He was able to recall what they had done and then they all decided to go back into the goblin infested ruin.

Upon descending the stairs, they heard some grunting from behind a previously cleared-out door.  Matt asked if it sounded like goblin or orc -- I said it was just loud grunting, not really a language.

He sent his goblin "friend" to "just take a look".  The goblin reported that "dere's an ogger" on the other side of the door.

Matt got very excited!  "Can I charm an ogre?" he asked.  I said that he could.

Anonymous, the elf mage, snuck through the door and carefully peeked around the corner.  The ogre was looking the other way.

"I'll cast charm person!" he exclaimed.  I told him that the ogre would get a save and if he saved, he'd know that someone was there to cast the spell.  Matt said that would be OK.

The ogre saved.  Matt was disappointed.  "I run away!" he said.  I rolled some dice and told Matt to make a saving throw, otherwise Anonymous wouldn't get away in time.  He rolled a 1 and Anonymous tripped over his own feet....

The ogre stormed up to the fallen elf and swung his mighty club...  I used this guy 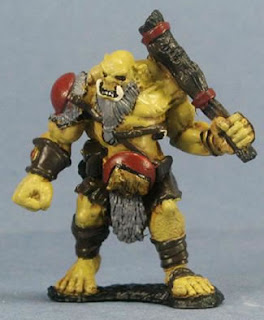 (I paused throughout this part of the adventure for dramatic effect.  :)  I asked Matt his AC.  "10" he said.  Gulp.  I told him that the ogre would have to roll a 10, but he'd also get to add 4 to his roll for being a powerful monster.  "Less than 6" he figured and Anonymous would be OK.

Matt said, "I get up and run" but I told him, roll initiative.  This whole time the party is in the larger room getting ready for the ogre to emerge.  They didn't know that their wizard was in peril...

I told him, "He takes an other swing at you lying on the floor.  You are rolling around trying to avoid getting hit..."

Leaving us on tenter hooks is cruel though.