In my Queston Campaign, a terrorist/crimelord named Kerrick the Fist ran a crime syndicate in the city of Traderton.

He protected his wharf warehouses with some automatons made from reinforced old crates and boxes -- the box golem.

Here's an artists take on a similar creature from io9 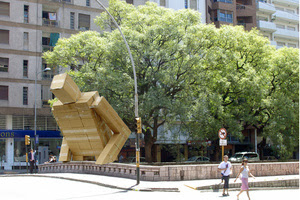 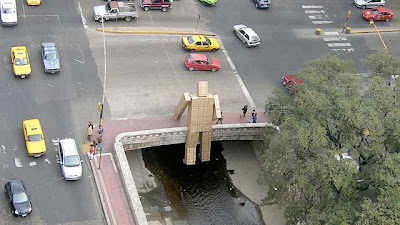 Built from reinforced wooden crates and boxes, the box golem looks like an inanimate stack of storage containers until it is disturbed by intruders or thieves.  It will surprise on a 1-3 on a d6.

When active, a box golem can be built to have nearly any shape.  Most are humanoid in appearance with  boxy fists that snap like claws.  More "stylized" versions look like crabs, spiders and giant hounds.

Box golems attack by bashing with their wooden and steel reinforced box fists or some attack with snapping claw-like boxes with sharpened edges.

If a box golem hits a target with both fists, it will attempt to catch and capture it within a box.  The target must save or be trapped and locked within the body of the golem.  The compartment is cramped and suffocating, but the victim will be safe until released.  If the victim possesses exceptional STR or certain skills or magical abilities, escape might be possible at the discretion of the GM.

Box golems take half again as much damage from magical fire attacks.  They are immune to electrical damage.

Cool! I could certainly make use of a box golem in the City.

Delivery-men should have +4 to hit and damage against them. No box survives contact with a delivery-man.