Keeping Score in the Dungeon

Christian over at Destination Unknown recently made a post about keeping score in baseball that resonated with me.  He commented, more or less, about how cool it would be to "keep score" on battles in the dungeon.

Below, please find my first attempt.  Description of the events follows: 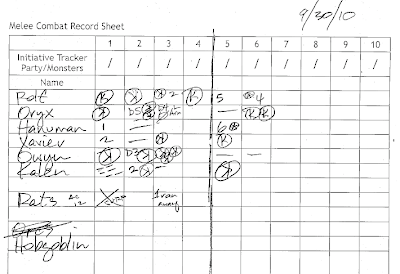 This score card represents two fights.  One fight (Rounds 1 - 4) are with a group of Giant Rats and the other fight (Rounds 5 - 6) are with Hobgoblins.
Rolf, Oryx, Hanuman, Xavier, Owyn and Kalen are the PC's in no particular order.
At the top of the chart was the initiative tracker that I completely forgot about.  Bummer.  The idea was to write down what the sides got on their d6 so that I'd remember who went first.  :(
BATTLE ONE vs. THE RATS
During Round 1, the adventurers had surprise and no rats were able to attack.  Rolf hit a rat and killed it.  It was already partly damaged.  Had it been killed with a single stroke, it would be a backwards-K like Oryx has in round 1.  Hanuman hit a rat for 1pt, Xavier for 2.  Owyn killed a rat outright.  Kalen missed 3 times with missile weapons.
During Round 2, Rolf hit another rat and killed it outright.  Oryx killed two rats with one swing each.  He took advantage of the "chop when they drop" house rule that I allow to fighters of all stripes and dwarves.  He was also bitten by a rat for 5 points (D5).  Hanuman and Xavier missed in melee combat.  Owyn took 3pts and killed a single rat.  Kalen took 2pts and killed a rat.
Round 3; Rolf kills a rat, takes 2 damage.  Oryx is hit for 4 points that reduces him to 0 or below.  He rolls on my "Death Dismemberment and Deadly Damage table" and hears the bones of his left arm crunch between the jaws of the giant rat.  Ouch!  Hanuman must have missed, Xavier kills a rat, and Owyn goes ON A RAMPAGE!  Killing three rats in quick succession!  Wow!  Kalen misses and the final rat breaks morale and runs away.  Thus endeth the battle.
BATTLE TWO vs. THE HOBGOBLINS
The hobgoblins were completely ineffectual in this battle.
Round 1(5); Rolf hits one for 5, Oryx misses, Hanuman hits one for 6 (a critical hit), Owyn misses and Kalen kills one with a single attack.
Round 2(6); Rolf hits one for 4 points, Oryx sweeps in and finishes that one off and another one and Owyn misses.  At this point, I believe, a "Sleep" spell was loosed by Kalen and all the parties troubles were over.
THOUGHTS
The sheet was handy and it did a pretty good job for the first crack at it.  Future iterations will have multiple columns for each round.  PC's will record their info that round in one; the monsters in the other. I'm toying with a third (middle) column that will show how many monsters are ganging up on each PC.  The initiative rolls are key.  I mustn't forget them in the future.
A circled number will represent a kill.  A K will represent a critical only.   K6 will be a Kritical Hit for 6.  If its circled, that means it dropped the target.  Dashes will be melee misses and some other symbol will be missile misses.  :)   Got to account for spells and other events as well.
Let me know what you think and I'll keep you all apprised of my playtesting progress.

Very, very cool. I was just getting my scorecard ready for tonight's Braves/Giants game, so your post was very timely and inspiring!

What a cool idea! I love baseball and this is a really ingenious way to record and keep track of battles.