Page 6 is a page tied exclusively to the random encounter tables in CotMA.

I've cut and pasted and interlocked the encounter tables from within the module.  I've also used my "how long until a random encounter" matrix to fill in the dots on the left.

The characters explore the dungeon.  Each turn, I mark a dot.  When I run out of dots, I cross-reference the row I'm on with the column for the level they are currently exploring. 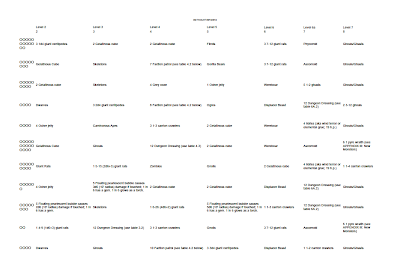 Here's a scan of a page with marked off dots -- (PS: this page is before I expanded the page to Level 8, but you'll get the idea...) 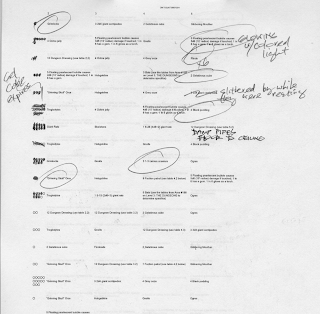 Another added benefit to this method is the way it sort of "outlines" the adventure...

For example, looking at the page above, the adventurers began on Level 1 and very quickly (1 turn) they encountered some Grimlocks.

They defeated them and over the course of an hour, the descended to Level 4 where they encountered a glowing bubble.

A couple of Gelatinous Cubes were encountered (something happened with one... maybe it was frozen or something...) but when the party hunkered down to rest in the dungeon, a group of Giant Centipedes skittered by.

Later on, they encountered some Black Puddings, found a room filled with damp pipes, and some more Black Puddings.  (With all these Black Puddings around, this might be the expedition when the Frostbrand of Errol was destroyed... that led to another series of quests...)

On their way out of the dungeon, they happened upon some Carrion Crawlers and then the Grinning Skull Orc Tribe.

An additional benefit I've just though of now would be to use what's happening on the unexplored levels as ideas for how the dungeon is evolving over time.

For example, The Grinning Skull Orcs appear once and Troglodytes appear three times during the expedition.  IF I WANTED to explain what might be happening on Level 1 during the time the adventurers were exploring, I might say that the Orcs and the Trogs had a confrontation.  Perhaps, even when the party was leaving the dungeon, the conflict might still have been raging. 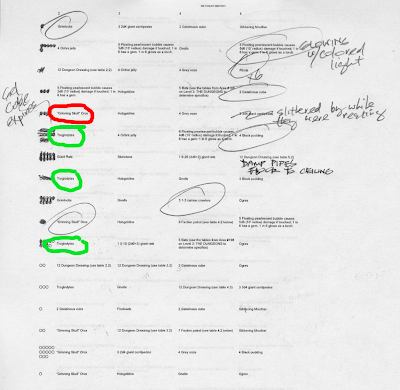