This is a simple page -- I use this page to track damage on monsters that the characters fight.

Each line is one (1) random d8.  The script draws a number of "0"s equal to the number.  If a monster is 3 HD, I just bracket the first three lines.  As damage is done, I mark off the circles. 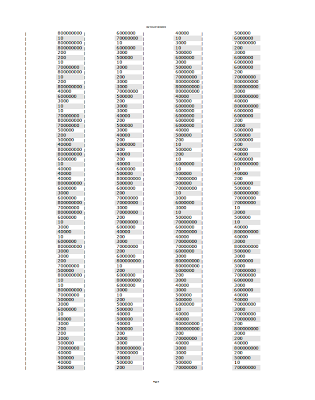 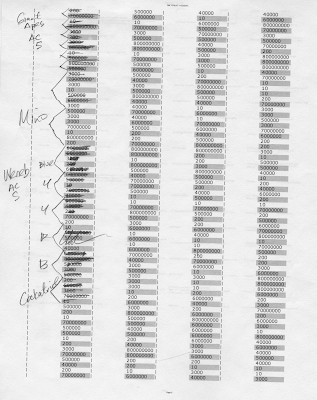 This sheet represents six giant apes.  I think they attacked the characters in and around some pits.  Their jumping was useful to keep the characters off balance.

Two minotaurs were also fought.  Also five wereboars.  I use MageKnight figures, so they are often marked with Blue, Red and Yellow; hence the notes.

This particular episode marked the death of Karn, a human that was transformed into an ogre and subsequently rescued by the party.  He was killed a short time later before they could escort him to the surface.

@Anon - thanks for the comment. I'm a little puzzled though... I'm doing that, I think. Can you clarify what your formula does? Many thanks in advance!

So the =RandBetween(x,y) generates a random number between x (1) and y (8) this would go in colum B1

Then in the next column C1 you would have the =REPT("O", A1) which would print "O" (or any other character) the number of times listed (in this case the value in A1).

Drag fill Colum A (Select cell A1, and drag the selection box down), this will set random numbers as far as you drag. Then do the same for B1 (the circles).

I have uploaded my (WIP) spreadsheet based on your wonderful ideas:

@Chuck -- that's cool stuff. I think I recognize some of that, but I'd love to swap source notes with you. :)

It looks like you are pulling info off the web on a few pages, but I don't know what those links are.

I spent some time today and compiled all (I think) of the sources I have used in the spreadsheet;

http://www.risusmonkey.com/2011/02/dungeonwords.html > The awesome Dungeon Words.
http://en.wikipedia.org/wiki/List_of_Crayola_crayon_colors > My Colour list
http://generators.christopherpound.com/sfng.html > NPC Names
http://hackslashmaster.blogspot.ca/2011/02/on-tricks-empty-rooms-and-basic-trap.html > -C's Tricks and Traps
http://www.momswhothink.com/reading/list-of-verbs.html > Big list of verbs
http://www.momswhothink.com/reading/list-of-nouns.html > Big list of Nouns
http://www.dandwiki.com/wiki/SRD:Animal > List of everyday animals (3.5e list, because it was the first I found, does not matter as I am just using it for the names, and not the stat blocks.)
http://www.dandwiki.com/wiki/SRD:Creatures > List of monsters (again above)

@Chuck -- WOW!! Thanks for all that! That is a comprehensive list! I will definitely be (ahem) stealing some of those for my doc. After I update it, I might just have to write *another* post about it. I'm an inveterate tinkerer, so I've added some things.

Thanks again for those links!

You are more then welcome. Thank you for all of the great content and ideas!

On another note, I sometimes use the words from the captcha for one-off names (for instance the Captcha word for this post is "Aksocol") kina digging it for the Big Bad guy / place name, Ziggurat of Aksocol has a nice ring to it :)