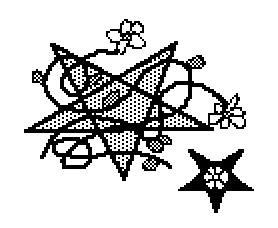 •  Once per day, an Arcane of Aerylyn may Detect Magik.
•  At 8th level, Arcane of Aerylyn may Identify magikal items as a wizard of half their level.  They may do this once per day and once more for every two levels of experience beyond 8th.
•  Starting at 2nd level, Arcane may be granted Wizard spells of a single school as if they were wizards of half their level rounding down.  The school is chosen by the Arcane the first time he requests a wizard spell and is fixed thereafter.  The wizard spells take the place of a priest spell of the appropriate level.  Only spells which are common or very common may be requested by the Arcane.
•  Arcane gain a bonus of +2 on saving throws versus any sort of magik.

Other Notes:  •Aerylyn is the force all good and neutral mages revere, for she is the ultimate power source behind their spells.  •Arcane of Aerylyn are dedicated to the preservation of wizardry as an art.  They are responsible for keeping balance between the oppositional schools of wizardry.  And oppositional forces in magik.  They serve as mediators in all disputes between the schools.  They do not revere the politics or the wizards, but the magik itself.  •The Arcane (Arcane is both singular and plural) dress in ornate robes of a single, specific color for each school of magik specialization.  •The Arcane of Aerylyn do not have temples, but instead occupy an important part of the Wizard's Guild structure known as the Octoval, from which they dictate their decrees.  They are in charge of spell availability and the purse strings of the guild itself.  •They also have the additional responsibility of preventing one faction of wizardry from overtaking the rest.  •The first major test of their power was the Phantom Heresy. During this heresy, Illusionists tried to take over the Wizard's Guild.  The Octoval set forth decrees of secrecy within the school of Illusion and set their writings apart from the rest of the schools with the creation of their special language, Illspeak.  •Should the Octoval declare a wizard treasonous or heretical, an Arcane can be bestowed a special Curse, The Mortylomancy (it means "Death of all Magik"), which has the power to strip a specific wizard of his power.  This curse cannot be removed by dispel magik or remove curse, but only by decree of the Octoval.  The curse cannot and will not be bestowed to an Arcane of Aerylyn without the official decree of the Octoval.  •The reason Aerylyn has such fell creatures as Dragons in her portfolio is that legend states she created them during the Age of Magik.

A goddess not the be trifled with, for sure.